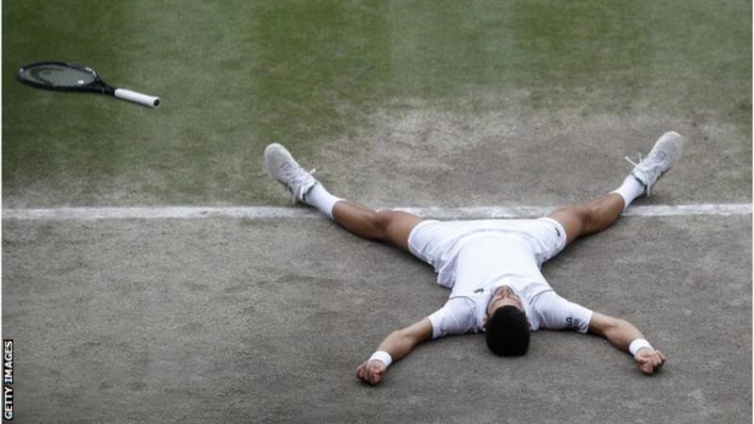 Seventh seed Berrettini, 25, received loud backing but could not maintain his advantage in his first major final.

“Winning Wimbledon was always the biggest dream for me when I was a kid,” said the world number one, who dropped a set for only the second time in the SW19 fortnight.

“A seven-year-old boy in Serbia constructing a Wimbledon trophy with improvised materials and standing here with a sixth real trophy is incredible. It is amazing.”

Having already claimed the Australian Open and French Open, Djokovic is the fifth man in history – and only the second in the Open era after Rod Laver in 1969 – to win the first three majors of the season.

And with Djokovic retaining his crown at the All England Club, he has moved a step closer to becoming the second player to achieve a ‘Golden Slam’.

Only Germany’s Steffi Graf in 1988 has ever won all four majors and the Olympics in a calendar year.

Berrettini saved two match points at 5-3 in the fourth set with a controlled volley and a 101mph forehand winner down the line. But the Italian could not fight off the third as he sliced a backhand into the net.

Djokovic fell flat on his back with his arms outstretched after sealing a hard-fought victory, while Berrettini’s contrasting emotions on the opposite baseline – bending over double with his hands on his knees – illustrated the effort he had expended in defeat.

After taking the acclaim of a rapturous Centre Court crowd, Djokovic climbed up to his support team to celebrate before finding a few spare seconds to have a selfie with one young fan.

DISCLAIMER: The Views, Comments, Opinions, Contributions and Statements made by Readers and Contributors on this platform do not necessarily represent the views or policy of Multimedia Group Limited.
Tags:
Grand Slam
Matteo Berrettini
Novak Djokovic
Wimbledon