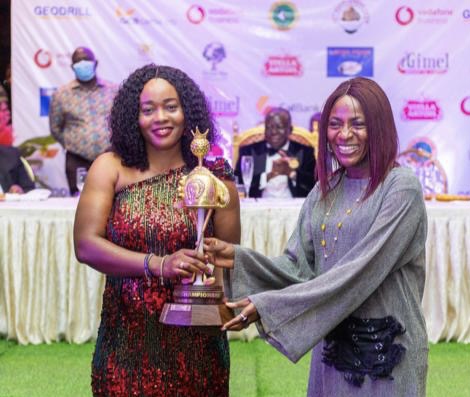 Constance Awuni of the Royal Golf Club and Kofi Yeboah of the Tafo Golf Club emerged winners of the 2022 Vodafone Otumfuo Golf Championship held in Kumasi over the weekend.

The tournament saw Kofi Yeboah clinch the win in the Men’s Championship with a score of 306 to beat James Akwaboah and Christopher Osei Cobbinah, who placed second and third, respectively.

Constance emerged the winner in the women’s event with a score of 167 to beat Jessica Tei and Bernice Dzitorwoko, who placed second and third.

The winners had the honour of being presented with their prizes at a plush awards ceremony held on Saturday, June 11, 2022, at the Golden Tulip Hotel in Kumasi. Winners in other categories, such as the Handicap category (Men and Women), among others, were also awarded.

The award ceremony was graced by the Asantehene Otumfuo Osei Tutu II, his chiefs, the headline sponsor of the tournament, Vodafone Ghana, and other sponsors.

“Vodafone Ghana commends all winners in the Vodafone Otumfuo Golf Tournament. We believe that golf is a sport that needs to be embraced by all. That is why Vodafone Ghana continues to support this tournament, and by extension, Asanteman. We hope to experience this joy again in the next edition of the championship.”

For the past 60 years, every Asantehene has consistently hosted the Golf Championship. Aside from football, the sport is touted as one of the leading and most popular in Kumasi.

In 2017, Vodafone Ghana signed a five-year strategic partnership with the Royal Golf Club, which has proven to significantly benefit customers and non-customers of Vodafone in the Ashanti Region.

The telecom giant recently extended the partnership deal for another five years.

Through this partnership, Vodafone introduced various initiatives that have had a great impact on the lives of the people. These include a free health screening activity dubbed Healthfest, clean-up, and donation exercises, among others.

Most importantly, Vodafone Ghana has established a fruitful relationship with His Royal Majesty, Otumfuo Osei Tutu II and the people of the region through its ‘Ashanti Month’ campaign with the Asantehene Golf Championship as its ultimate highlight.