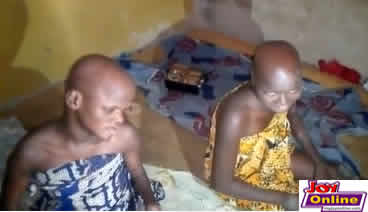 A woman with two children who are both physically challenged at Battor in the North Tongu District of the Volta Region, has called on government and benevolent organisations for support.

Alnice and Atsufui, aged 25 and 23 respectively, were paralysed at birth and have been confined to their home.

Their 45-year-old mother, Christiana Dzekle said taking care of the two has been extremely difficult due to her current financial state.

The two physically-challenged women are unable to do anything for themselves as they rely on their mum for everything including feeding.

Alnice, the oldest among them lamented to JoyNews that life has been challenging for their unemployed mother.

Their mother, who could not hold back her tears, recounted the ordeal she and her family have gone through to the District Chief Executive (DCE) for the area, Richard Collins Arku.

This came to light when the DCE distributed a number of items to persons living with disability, including her two children at the District Assembly. Madam Dzekle also asked for medical care for children.

In a response, Mr. Arku said despite the commitment of the government in alleviating plight of persons living with disabilities, NGOs and other benevolent organisations should come to the aid of the woman and her daughters.