Woman killed in accident caused by road rage at Kumasi 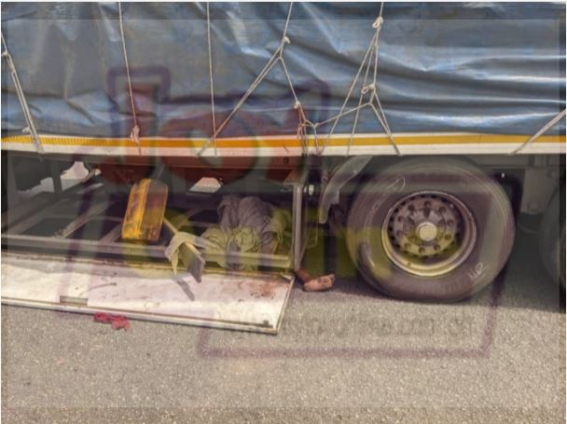 One person has died in a road accident at Anloga Junction in Kumasi, following a road rage incident between two drivers.

Others, including a pregnant street hawker and the deceased woman’s infant, have been injured.

According to eyewitnesses, a heavy-duty truck driver intentionally rammed the back of a commercial urvan bus in an attempt to avenge reckless driving.

The heavy-duty truck carting salt had accused a commercial Urvan bus driver of reckless driving at Boadi Junction and allegedly threatened to harm the trotro driver.

The truck driver pulled a metal bar from his vehicle in road rage and attempted to assault the other driver.

After being calmed down by passers-by, the trailer driver drove behind the Urvan bus at close range in what eyewitnesses say looked like an intent to cause harm.

Occupants of the Urvan bus alleged that the truck driver intentionally hit the mini-bus at the rear to avenge the earlier feud.

The driver of the affected bus, Nana Yaw, explained, “the truck followed my car closely, and it looked like he wanted to harm us as threatened. At a point I realized he was too close, so I switched lanes, and he, unfortunately, run into another car”.

Three Urvan buses were affected in the process.

The deceased woman was allegedly thrown out of the mini-bus during the impact and was dragged under the trailer for some moments.

The injured in the accident are receiving treatment at the KNUST Hospital. Street hawkers who witnessed the situation are frightened.

Police at Oforikrom have apprehended the driver of the truck to commence investigations.

DISCLAIMER: The Views, Comments, Opinions, Contributions and Statements made by Readers and Contributors on this platform do not necessarily represent the views or policy of Multimedia Group Limited.
Tags:
Accident
Anloga Junction
Kumasi
road rage