Women should help men to be better husbands – Amos Kevin-Annan 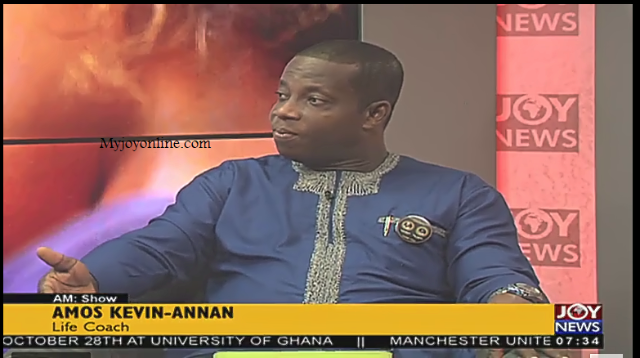 Life coach, Amos Kevin-Annan has advised women to give the maximum support to their husbands in trying times.

Mr. Annan stated that men would want to protect their ego and project the feeling of being strong and will therefore, not open up about matters bothering them so it is the responsibility of the wife to help her husband find solace in such difficult moments.

Speaking on the AM Show on JOY NEWS TV on Friday, Mr. Annan echoed that men refuse to open up on issues like financial problems and infidelity issues to their wives because, it will make them weak and “no man wants to feel weak”, he said.

On the topic of when to confront the men to solve these issues, he advised that the woman should pick their timing very well because “a man will not stop watching a football game to discuss an issue he is insecure about with you.”

"And in the case of financial difficulties, you should help your husband if you can and do so discreetly. You don’t give money to your husband to pay the children’s school fees and go and tell the children you supplied the money or give out the money in the presence of the children, it will kill the self-esteem of your man," he said.

The husband should also do well to show appreciation to such supporting wives so they can be motivated to do so in subsequent times. "If you don’t show her that you appreciate the help she is giving you, the next time she may make the children know the funding of their fees is from her and not you," he added.

On the topic of infidelity in marriage, Mr. Amos said wives should strive to give their husbands “what no other woman on earth can give them” and with that infidelity will disappear.

Some men are victims of accidental infidelity because they find ladies outside their marriage that give them the affection that is missing from their wives and they turn to become unfaithful. In such situations they are victims and not perpetrators, he stated.

Women should be affectionate to their husbands and create good communication at home to avoid such situations. "It is easy to find a manager kneeling before an 18-year-old intern asking for a hug but he won’t kneel before his wife due to poor communication between them, h"e mentioned.

Men will also feel reserved about conversing with their wives because of the ambiance the wife creates.

He said: "If he feels you just want to find fault in what he will say, he will give you a short answer but will go on and on if someone else asked him."

“It is the duty of the wife then to create a good ambiance at home so the man does not feel interrogated when talking about simple matters like how was your day?

He also advised women to build a good reputation for their husbands before their [wife's] family and colleagues.