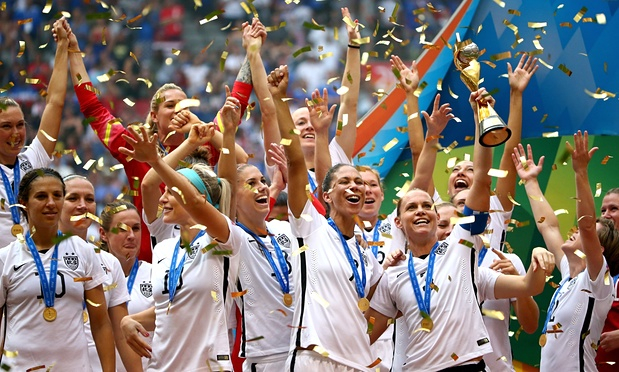 Carli Lloyd’s fiance Brian wanted to come to Vancouver to see her play in the Women’s World Cup final. Lloyd told him to stay home.

He had to watch her score a hat-trick and lift the trophy on television instead.

“My fiance was coming, until I made sure he wasn’t. It’s just so demanding mentally – I feel more mentally zapped right now than physically,” Lloyd said after the match. “I want him here now to celebrate, but I just had to focus.”

Sunday was a rematch of the 2011 Women’s World Cup final, and a redemption story for the Americans, but all of that melted away as Lloyd put on the kind of performance that requires someone to be completely in the zone. What had gone before between these two teams didn’t matter in the end: Lloyd wrote her own history.

This wasn’t the first time Lloyd had punished Japan. In the 2012 Olympics, she scored both of USA’s goals to clinch the gold medal 2-1.

The USA regained the trophy after 16 years and meted out a measure of revenge for their defeat four years ago against the same opponents.

The Japan defence – so unified and coherent throughout the tournament – were lackadaisical from the off, and failed to mark Lloyd twice in the first five minutes, giving her space to run in to the box and notch her first two goals.

Lauren Holiday added the USA's third, after a poor Japan clearance gave her space to lash home spectacularly, but it was overshadowed by Lloyd's own third, just a minute later, an effort from the halfway line as she spotted Ayumi Kaihori off her line.

“She always does this to us,” Japan coach Norio Sasaki said. “In London, she scored twice. Today, she scored three times. So, we’re embarrassed, but she’s an excellent player.”

Yuki Ogimi got a goal back for Japan, creating her own space in the box just before the half-hour mark to knock past Hope Solo.

And it was an unfortunate 52nd-minute own goal from Julie Johnston, who has had an excellent World Cup, that gave Japan the feeling they might be able to stage a comeback.

But two minutes later Tobin Heath restored the USA's advantage after more poor marking and goalkeeping gave her chance to notch the fifth.

The match was also noteworthy for substitute appearances from three legends – Homare Sawa in her sixth World Cup, Abby Wambach who reclaimed the armband from Lloyd, and Christie Rampone, now 40 years old.