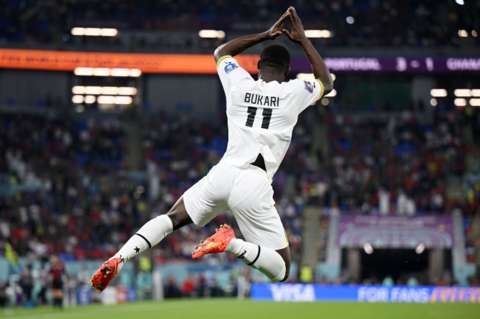 Ghana striker Osman Bukari says he did not disrespect Cristiano Ronaldo when he copied the Portugal star’s goal celebration after scoring against them in their World Cup Group H match on Thursday.

Substitute Bukari pulled a goal back to make it 3-2 in the 89th minute before running towards a corner flag and recreating Ronaldo’s famous ‘Siu’ pose.

The former Manchester United forward had given Portugal the lead with a milestone goal at Stadium 974 in Doha but had been substituted by the time Bukari headed in from six yards.

“I have noticed my celebration has generated comments claiming I was disrespectful towards Ronaldo,” the 23-year-old posted on Twitter.

“This is incorrect. I was overcome by the emotion of the moment of scoring for my country on my World Cup debut leading to my celebration.

“My upbringing doesn’t permit me to be disrespectful to elders let alone one of my idols.”

The 2016 European champions managed to close out the win, leaving Ghana bottom of the group following the opening round of games after Uruguay and South Korea drew 0-0 earlier on Thursday.

Ronaldo became the first man to score at five different Fifa World Cups when he put Portugal ahead with a 65th-minute penalty after he went down following a challenge from Mohammed Salisu.

“I think it was a really wrong decision, we were playing the ball. I don’t know why VAR (Video Assistant Referee) did not come up, there was no explanation for it,” said Addo.

“It was a wrong decision. It was actually a foul against us.”

Addo said he had tried to talk to the referee about some of the decisions after the match.

“I wanted to do it in a calm way but I was told he was in a meeting. He was not in our favour. We got a few yellow cards which were deserved but there was also holding of jerseys and stopping counter-attacks that were also yellow cards but not given to them.”

Asked about Ronaldo’s milestone goal, Addo said: “If somebody scores a goal, congratulations. But this was a gift, really a gift.”

Brighton wing-back Tariq Lamptey also came on as a second-half substitute and said his World Cup finals debut was a “bittersweet” moment.

“It’s difficult. On another day we get a different result,” the 22-year-old added.

“We have to just dust ourselves down now, work hard in training and look forward to the next game.”

Ghana play South Korea in their second Group H match on Monday (13:00 GMT), with their final game against Uruguay on Friday, 2 December.

DISCLAIMER: The Views, Comments, Opinions, Contributions and Statements made by Readers and Contributors on this platform do not necessarily represent the views or policy of Multimedia Group Limited.
Tags:
Cristiano Ronaldo
Osman Bukari
Qatar 2022 World Cup
Siu pose
World Cup 2022