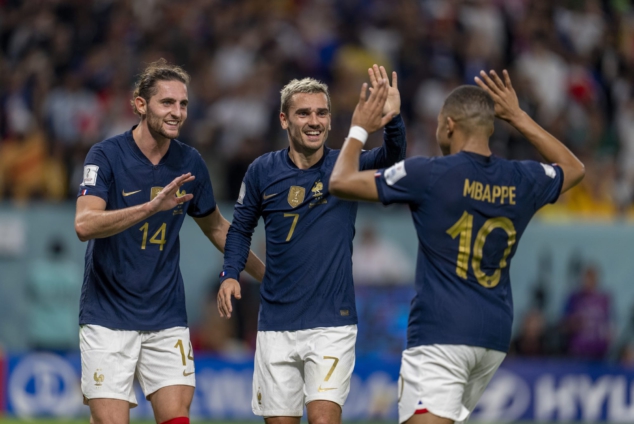 There was only one big story circling before France’s game with Denmark. Would Olivier Giroud become his country’s all-time leading goalscorer?

But fellow frontman Kylian Mbappe had other ideas.

The man described as a “superstar” stole the show with both goals as defending champions France won 2-1 to become the first team team into the World Cup knockout stage.

“Kylian, what can I say?” said France boss Didier Deschamps. “An exceptional player. He has the ability to be decisive, stand up from the crowd and make the difference.

“Opponents have to rethink their structure and formation. Kylian is supported by other players who are as dangerous as him, but free him up to play his game.

“He had the objective of playing at the World Cup and France needs Kylian.”

‘He’s got it all, a very special talent’

Brilliant and pure box office, Paris St-Germain forward Mbappe again proved why he is tipped to be the game’s best player.

His number 10 shirts were everywhere you looked outside and inside Stadium 974, while his name got the loudest cheer when the line-up was read out before kick-off.

Lightning quick, skilful and coolness personified in front of goal, supporters and journalists are left drooling every time Mbappe gets the ball at his feet.

He gave Denmark a warning of his pace in the first half when, out of shot, he suddenly darted in behind looking to latch onto Antoine Griezmann’s through-ball.

As he looked to break clear, he was hauled down by Andreas Christensen, who only got a yellow card as two Danish team-mates were in a supporting position. It was doubtful, though, that either would have got near Mbappe as he burst away.

He did get his reward just after the hour mark, playing a delightful one-two with Theo Hernandez to convert, before bundling in the winner on 86 minutes from Griezmann’s cross.

“What a player, what a superstar,” former England striker Alan Shearer said on BBC Radio 5 Live. “He made the difference tonight.

“When you’ve got that guy in your team, in the form that he’s in, he looks so comfortable and confident in front of goal, you’ve got a chance. He won the game for them.

“Whatever you have to have as a forward, Kylian Mbappe’s got it all. The timing of his runs, the understanding of when and how to go. He’s a very special talent.

“Because of him, that is France’s chance [of winning the World Cup again]. If he keeps on performing and he’s in that mood, France have got a chance.

“He looks like a kid in the playground – he just looks like he’s enjoying it. As soon as he gets the ball you can hear the roar and he’s feeding off that, there’s no doubt about that. He loves that – and rightly so.”

Giroud and the great Thierry Henry are tied on 51 international goals, with the AC Milan striker having looked to go out on his own against Denmark.

But Giroud may now be looking over his shoulder as Mbappe closes in on the record mark with every game in a Les Bleus shirt.

The 23-year-old is now on 31 goals, seventh on the all-time list alongside arguably France’s greatest-ever player in Zinedine Zidane.

Henry played in four World Cups and scored seven goals, but Mbappe has already equalled that number, which is also one fewer than Lionel Messi and Cristiano Ronaldo.

Despite it only being his second tournament, Mbappe is now France’s second-highest scorer at a World Cup.

He is behind Just Fontaine, who only played at one tournament in 1958, but scored a remarkable 13 goals in six games.

With Real Madrid striker Karim Benzema ruled out of the tournament with injury, Mbappe may have to shoulder more of the responsibility in the attacking third.

Asked if Mbappe is a team leader despite his young age, Deschamps added: “He is a leader, yes. There are three types of leaders; physical, technical and mental leaders. Leadership does not have one pace.

“Mbappe does not talk much, but is like a steam train on the pitch and gets the crowd up and wants to do everything for the team. There are natural-born leaders on the pitch.”

DISCLAIMER: The Views, Comments, Opinions, Contributions and Statements made by Readers and Contributors on this platform do not necessarily represent the views or policy of Multimedia Group Limited.
Tags:
France
Kylian Mbappe
Qatar 2022 World Cup