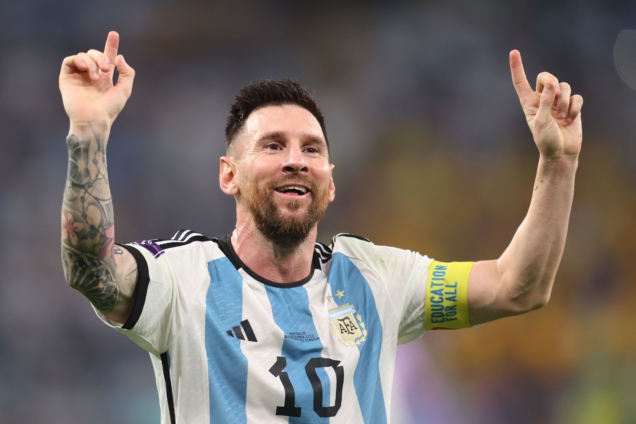 The clock was ticking towards 1am local time at Lusail Stadium when Argentina’s vast hordes of support burst into their second round of wild celebrations as a chaotic, dramatic and sometimes unsavoury World Cup quarter-final against the Netherlands was finally won.

Argentina’s sense of destiny here in Qatar is acquiring several layers, the first being that Lionel Messi is on a mission to win the one elite trophy that has always eluded his grasp.

And it was sharpened before the game when the songs that have provided the soundtrack to Argentina’s World Cup campaign filled the surroundings of this futuristic arena as Brazil, those bitter historic rivals, went out on penalties to Croatia.

If Argentina’s players and fans celebrated twice, they also effectively had to win this quarter-final twice, squandering a 2-0 lead in the 11th minute of stoppage time before prevailing 4-3 on penalties to meet the World Cup’s very own mentality monsters of Croatia in the semi-final on Tuesday.

The Argentine masses who made up the vast majority of the 88,235 crowd, providing a wall of sound and a splash of colour, were silenced momentarily when the unlikely figure of Wout Weghorst, on loan at Besiktas from Burnley and on as a substitute, scored two late goals to send the game into extra time.

It came as a huge shock to Argentina’s system after 35-year-old Messi, in what is surely his last World Cup, looked to be inspiring them into the semi-finals with something to spare after brilliantly creating Nahuel Molina’s opener before the break, then making it 2-0 from the spot in the 73rd minute.

Aston Villa’s keeper Emi Martinez was Argentina’s hero in the penalties, saving the first two Netherlands spot-kicks from Virgil van Dijk and Steven Berghuis as the eventual victory margin was 4-3.

Argentina’s celebrations were a mixture of relief, pure elation and the increasing sense – especially after Brazil’s demise – that this really could be their World Cup, although they under-estimate Croatia at their peril.

Their fans claimed huge swathes of Lusail Stadium for almost an hour after the game to go through their full songbook long after Argentina’s joyous players had departed the scene.

When they finally left the party only moved outside, the drums and horns still providing a backing track that was going on well into the night.

And all this after a match of many flashpoints that yielded 17 yellow cards plus a red for Dutch defender Denzel Dumfries at the end, the largest number in World Cup history.

This included 15 players plus Argentina coach Lionel Scaloni and his assistant Walter Samuel. Dutch striker Weghorst was booked before he even came on as substitute.

Spanish referee Antonio Miguel Mateu Lahoz could actually be described as lenient, despite this history-making tally, especially when he completely ignored a deliberate handball by Messi, who was later shown a yellow card which the Dutch justifiably felt should have been his second.

Argentina’s players turned away from their own celebrations to taunt their stricken, heartbroken Dutch counterparts while verbal clashes followed after the penalties with Messi and Emi Martinez involved.

In other words, all rather eventful and sometimes distasteful. There was no love lost and this World Cup quarter-final was, at times, an eyesore.

At the heart of it all was the masterly Messi, who now has four goals and two assists in Argentina’s nine goals in the tournament so far. He also has 10 World Cup goals for Argentina, level with Gabriel Batistuta.

Argentina’s journey into the semi-final has echoes of their run to the 1990 World Cup final, which they lost to West Germany.

They were stunned by Cameroon in their opening game in Italy and here they were victims of the tournament’s biggest shock result when they lost to Saudi Arabia at the start of their group.

Messi is a member of this World Cup’s elite at a tournament that has seen Cristiano Ronaldo marginalised by Portugal and Neymar injured and then eliminated with Brazil.

France’s Kylian Mbappe remains but there is now the growing sense that Argentina’s superstar will contest another World Cup final, a chance to atone for the defeat by Germany in 2014.

He may provide the silken genius in this team but it is also mixed with a steel that makes Argentina the fiercest of opponents.

This can too often spill over into the sort of skirmishes we saw here, as players from both sides clashed on several occasions, including when Leandro Paredes was fortunate to stay on after receiving a yellow card for a poor challenge on Nathan Ake before blasting the ball at an understandably enraged Dutch bench.

Not that Argentina will care.

They adopt the ruthless, uncompromising approach they believe is designed to win World Cups, not popularity contests, and the two-time winners will be heavily backed to reach a sixth final, their first since they lost to Germany in Rio eight years ago.

Messi was left heartbroken at Argentina’s failure to record the ultimate triumph in the great Brazilian temple of the Maracana back then – now he will have his sights on the crowning glory of his career at Lusail Stadium on 18 December.

DISCLAIMER: The Views, Comments, Opinions, Contributions and Statements made by Readers and Contributors on this platform do not necessarily represent the views or policy of Multimedia Group Limited.
Tags:
Argentina
Lionel Messi
Qatar 2022 World Cup
The Netherlands