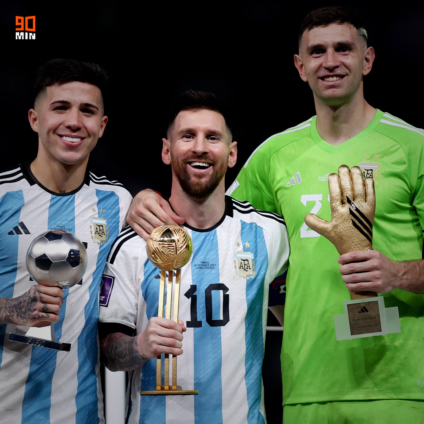 The curtains came down on an historic 2022 FIFA World Cup tournament in Qatar with Argentina crowned Champions of the World for the 3rd time in their history.

Lionel Messi scored twice in a pulsating game where French star Kylian Mbappe netted a hat-trick, the first World Cup final hat-trick since Geof Hurst’s in 1966, and still ended up on the losing side.

After a 3-3 draw following extra-time, Argentina won the penalty shoot-out 4-2, thanks mostly to the heroics of their goalkeeper Emiliano Martinez, who followed a crucial extra-time save with another from the shoot-out.

Martinez was voted ‘Best Goalkeeper of the Tournament’ and thus, awarded with the Golden Glove trophy.

Messi, who became the first player to score at every round of a FIFA World Cup tournament, was adjudged the Best Player of the Tournament and handed the Golden Ball.

Mbappe, did win a trophy with gold though, picking up the Golden Boot, the trophy awarded to the top scorer, with his 8 goals of the tournament.

Argentina’s Benfica midfielder, Enzo Fernandez, was voted the Best Young Player of the Tournament for the crucial part he played in Argentina’s run to winning the title.