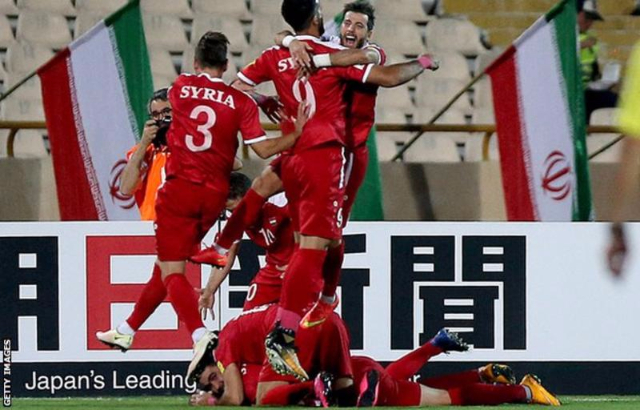 Syria scored an injury-time equaliser to earn a 2-2 draw against Iran and keep alive their hopes of qualifying for the 2018 World Cup in Russia.

But on the stroke of half-time, Sardar Azmoun headed Iran level before giving them a second-half lead.

Syria looked to be heading out, but Omar Al Somah coolly slotted home.

South Korea's goalless draw with Uzbekistan allowed them to claim second place in Group A in the Asian section and automatic progression to Russia.

It means Syria will face Australia in a playoff in October, before having to face a Concacaf side in another two-legged tie the following month for a place at the World Cup.

The dream of Russia 2018 is still alive. They are into a play-off now.

We went over to Syria for BBC Sport earlier in the year and spent six days in Damascus and discovered a truly remarkable story.

Syria is in the middle of a six-year war and the team has no money because of the sanctions. Lots of Syrians have mixed emotions about supporting the team. Some, but by no means all, feel that the team rises above politics.

The fact they are in contention for the World Cup is remarkable given what is stacked against them and they have a remarkable team spirit.

They play their home games in Malaysia, which is a 14,000-mile round trip, and where they will play the home leg of their play-off match.