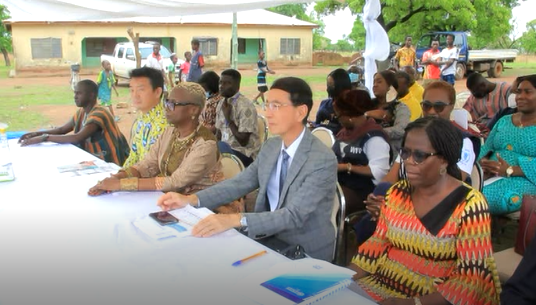 The World Food Programme (WFP) has launched an integrated nutrition-livelihoods public-private partnership project in the Karaga District of the Northern Region with a grant of $ 1.5 million from the Japanese government.

The project aims at improving nutrition and health service in 91 districts in 8 regions of Ghana and it’s targeted at reaching over 250,000 beneficiaries in these districts.

The project dubbed, “Universal Nutrition and Health Coverage through Sustainable Systems for Nutrition Improvement” is jointly to be undertaken by the Ghana Health Service, WFP and the Ajinomoto Foundation/KOKO Plus foundation.

Delivering a speech on the state of nutrition, food insecurity and malnutrition in the Karaga District, the Acting Deputy Director of Nutrition at the Ghana Health Service, Veronica Quartey revealed that 48.4 percent of households in the Karaga district are food insecure, something she described as disturbing.

“I was in great shock when as part of the presentation during the inception meeting of this project when my office was briefed on the findings of the comprehensive food security and vulnerability analysis in the Karaga district…it is never anticipated that the food security situation in Karaga would be this disturbing as shown in this study,” she stated.

She said even though Karaga, just like other districts, has issues with access to food at the household level, the figure was overwhelming.

The food insufficiency she said results in various health issues such as malnutrition, anemia and undesirable birth outcomes such as low birth weight, stillbirth and in most cases maternal deaths.

Veronica Quartey called on all to support in dealing with the issue of nutrition, food insecurity and malnutrition in the district.

She commended the Japanese government for its swift intervention in dealing with the issue in the district.

The District Director of Health Service, Charity Azantilow who delivered a speech on behalf of the Health Minister Kwaku Agyeman Manu said the launch of the project signifies a milestone in the health sector.

She noted it will leverage livelihood, social behavior change communication and food support to build the resilience of the vulnerable population to food and nutrition security in the district.

“It will also highlight the role of public-private partnership in addressing malnutrition in Ghana,” she said.

The Presiding Member for Karaga, Ziblim Sulemana, presenting a speech on behalf of the District Chief Executive for the Karaga District, Iddrisu Mohammed Saani said the WFP has made tremendous strive in the development of the area.

He cited support for the Ghana school feeding programme in 15 communities with food since 2018 as one of its support.

“The programme also supported about 80 schools in the district and two JHS particularly girls with the supply of food ration for take home to supplement the family food requirement,” he noted.

According to him, the integrated nutrition-livelihoods initiative will help the district address malnutrition among children in the area.

DISCLAIMER: The Views, Comments, Opinions, Contributions and Statements made by Readers and Contributors on this platform do not necessarily represent the views or policy of Multimedia Group Limited.
Tags:
Karaga
Nutrition
World Food Programme