The world's first full-scale floating wind farm has started to take shape off the north-east coast of Scotland.

The revolutionary technology will allow wind power to be harvested in waters too deep for the current conventional bottom-standing turbines used.

The Peterhead wind farm, known as Hywind, is a trial which will bring power to 20,000 homes.

Manufacturer Statoil says output from the turbines is expected to equal or surpass generation from current ones.

It hopes to cash in on a boom in the technology, especially in Japan and the West coast of the US, where waters are deep.

"This is a tech development project to ensure it's working in open sea conditions. It's a game-changer for floating wind power and we are sure it will help bring costs down," said Leif Delp, project director for Hywind. 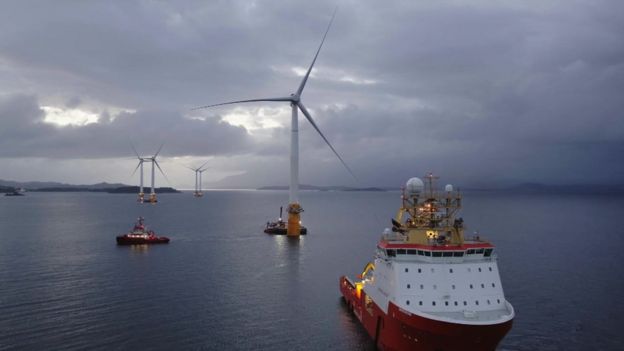 The huge turbines are currently being moved into place

So far, one giant turbine has already been moved into place, while four more wait in readiness in a Norwegian fjord.

By the end of the month they'll all have been towed to 15 miles off Peterhead, Aberdeenshire, where they'll float upright like giant fishing floats.

While the turbines are currently very expensive to make, Statoil believes that in the future it will be able to dramatically reduce costs in the same way that manufacturers already have for conventional offshore turbines.

"I think eventually we will see floating wind farms compete without subsidy – but to do that we need to get building at scale," said Mr Delp.

How big? The jaw-dropping dimensions of the technology used: 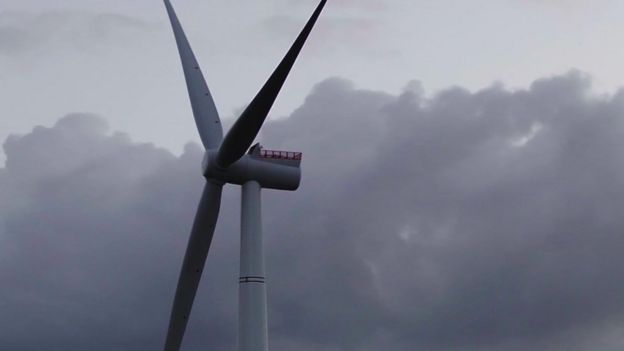 The turbines can operate in water up to a kilometre deep

The operation to begin shifting the first of the 11,500 tonne giants happened dramatically in the half-light of a Norwegian summer night.

Finally the giant was on the move, floating on a sealed vase-like tube 78 metres deep, its bottom filled with iron ore to weight the base and keep it upright in the water.

The price of energy from bottom-standing offshore wind farms has plummeted 32% since 2012 – far faster that anyone predicted.

The price is now four years ahead of the government's expected target, and another big price drop is expected, taking offshore wind to a much lower price than new nuclear power.

The Hywind project is being run in collaboration with the Abu Dhabi firm Masdar. The £190m cost was subsidised by bill-payers under the UK government's Renewable Obligation Certificates.

The bird charity RSPB Scotland opposed the project – not because it dislikes the technology but because it believes too many offshore turbines in the area have already been approved. 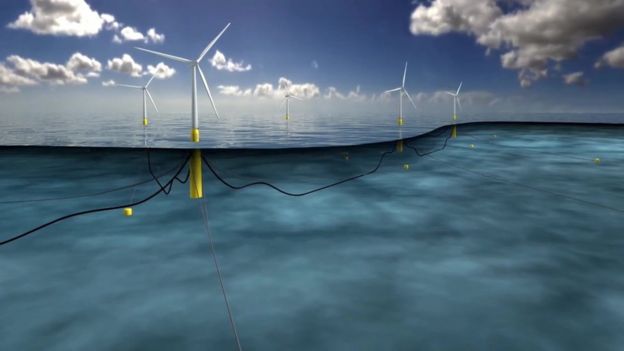 Thick mooring lines will tether the towers to the sea base

It fears thousands of sea birds may be killed by the offshore wind farms, although it admits that estimates are hugely uncertain because it is impossible to count bird corpses at sea.

The RSPB's Aidan Smith told BBC News: "Generally we are very enthusiastic about floating wind technology because it allows turbines to be placed far offshore – away from seabird nesting sites, and it helps us tackle climate change.

"We oppose the Hywind project because it adds to a situation we already believe is a problem."

Floating turbines may create a new frontier for energy – but scientists on the Intergovernmental Panel on Climate Change warn far more investment in additional new technologies is urgently needed for governments to keep promises on reducing emissions.