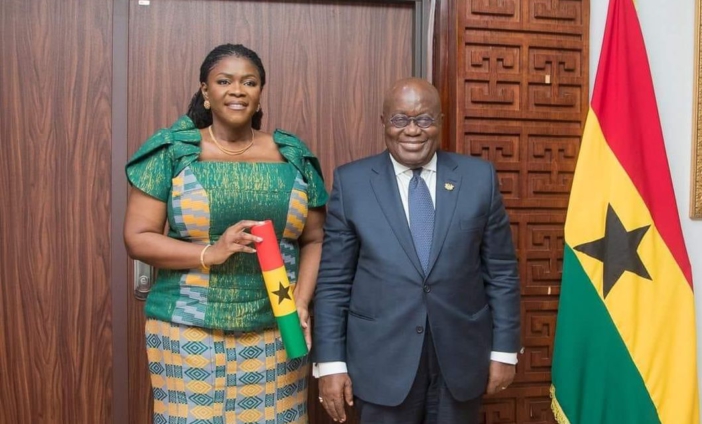 President Nana Akufo-Addo has asked the newly sworn-in Chairperson of the National Commission for Civic Education (NCCE), Madam Kathleen Addy, not to allow herself to be controlled by any person or institution.

He said the office is autonomous and should be treated as such.

This, he said, himself and his entire government will respect.

President Akufo-Addo said this when he swore in Madam Kathleen Addy on Thursday, June 16.

“I assure you, Madam Chairperson, of government’s recognition as enshrined in Act 452, of the independence of the NCCE.”

“Madam Chairperson, I need not remind you that you are not subject to the direction or control of any person or authority in the performance of your functions, including myself as the head of the Executive.”

The President also rejected calls for the abolishment of the Commission. According to him, such calls are misplaced.

He explained that the importance of the Commission is more relevant now as some people, he describes as irresponsible, are calling for the overthrow of the 1992 Constitution.

“The NCCE continues to be relevant and still has an important role to play in helping establish a culture of awareness in our country in which citizens live to their civic responsibilities and duties.”

“Especially at this time, when some responsible elements within the body politic are calling for the overthrow of the constitutional order,” the President said.

The new Chair also assured of a Commission that would work to impact society.

“I would like to, once again, thank you for the honor done me. I would like to thank all gathered here for showing up on this occasion. I am grateful. I promised the people of Ghana that I will execute my mandate to the best of my ability and I look forward to a renewed NCCE,” she added.

DISCLAIMER: The Views, Comments, Opinions, Contributions and Statements made by Readers and Contributors on this platform do not necessarily represent the views or policy of Multimedia Group Limited.
Tags:
Akufo-Addo
Kathleen Addy
NCCE