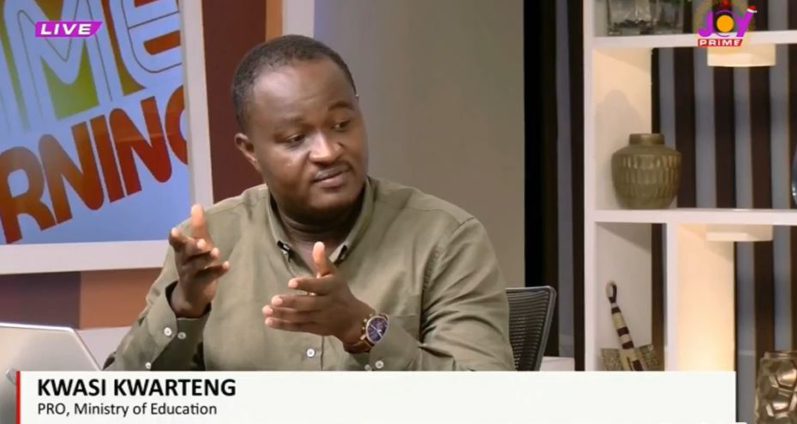 The Education Ministry has hit back at teacher unions opposing the appointment of the new Director-General of the Ghana Education Service (GES).

Dr. Eric Nkanasah was appointed as the new Director General of the GES following the termination of Professor Opoku Amankwa’s engagement.

But the National Association of Graduate Teachers (NAGRAT) on Thursday fiercely resisted the appointment of Dr. Eric Nkansah as GES.

President of NAGRAT, Angel Carbonu in an interview on Asempa FM’s Ekosiisen said Dr. Nkansah is not fit for the role because he is not a professional teacher.

The Ghana National Association of Private Schools has also waded into the controversy, describing the appointment as a breach of the law.

The association quotes sections 67(1), 68(1) and 79 (1) of the Education Regulatory Bodies Act, Act 1023 to make the point that “it is a total contravention of the teacher professionalism as far as the appointment is concerned and therefore does not support it.”

“GNACOPS strongly proposes that the appointment system of the Director General of GES, should be looked at carefully from the service view point, and be restricted to only Professionals within the Education sector.”

However, the Spokesperson for the Education Ministry, Kwasi Kwarteng is convinced that Dr. Eric Nkansah is the right man for the job.

Mr. Kwarteng stressed that the Ministry will not consider the views of the Teacher Unions, adding that the teacher unions have no power to determine who the President appoints as GES boss.

“We reject their rejection and call them to at least demonstrate some level of respect to the number one gentleman of the land and we want to let the unions know that it is not within their prerogative, neither it is within their power to determine who the President appoints to head GES,” he told JoyNews.

Prior to his appointment, he was the Technical Advisor/Director in charge of Tertiary Education at the Ministry of Education.

DISCLAIMER: The Views, Comments, Opinions, Contributions and Statements made by Readers and Contributors on this platform do not necessarily represent the views or policy of Multimedia Group Limited.
Tags:
Education Ministry
GES
GES Boss
GNACOPS
Kwasi Kwarteng
NAGRAT