You lament over 1.75% levy, but not paying taxes – Ofori-Atta to 60,000 professionals, others - MyJoyOnline.com 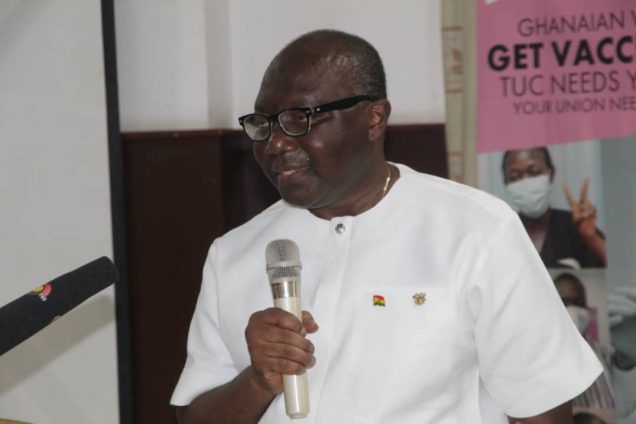 Finance Minister, Ken Ofori-Atta, has taken a swipe at the 60,000 Ghanaian professionals including Accountants, Doctors and Lawyers, and many more who have not been paying taxes, but lament the 1.75% Electronic Transaction Levy expected to be implemented from 2022.

According to him, digital levy is now the way to go because many Ghanaians who are not paying taxes or under declaring taxes can be captured.

Speaking at the TUC Economic Dialogue on the 2022 Budget, Mr. Ofori-Atta said the Electronic Levy is a necessary evil to rope in many Ghanaians onto the tax net.

“Through technology, therefore, we can find a means of ensuring that everybody contributes to this national reconstruction [economic recovery] that we have to do and recognise that this is the moment in our history, and to tackle these issues. Will it be uncomfortable? Of course, it will be uncomfortable.  But where is the shared burden for us to move across?, he asked.

“So, I listen to social media and then I look at the statistics. Since we brought the national ID [Identification Card] to the Ghana Revenue Authority, I can find some 60,000 of the people who live in my nice neighbourhood [Labone, Cantonements etc.] – accountants doctors, lawyers – who always blame the informal sector- masons etc. And these 60,000 people are paying nothing and they have been able to convince you that E-Levy is bad because it’s a tax on tax etc”, the Finance Minister explained.

“When I give you your income and you go and buy the Voltic bottle, I put VAT [Value Added Tax] on it, don’t I? So is that not a tax on tax? You can define it as such”, he pointed out.

Continuing, Mr. Ofori-Atta said “now, we have found a system where the issue of transfers is the order of the day and is going to continue to increase, but it catches everybody…then you talk about the poor. So these rich advocates talk about the poor, tax etc. and I’m saying I’ve excluded the first 100, which means that in any month the poor will not be taxed. So if ¢3000 per month is for the poor, is that true?”.

“So this ‘ananse approach’ using the base that is a lie and then building up on it to get all of us riled up, whiles we are at a point in history where we should consider that, what is that we all have to sacrifice to be able to get that son or daughter of yours to rid him or her of the indignity of not working.”, he added.

“When the Norwegians hear, and they are collecting 34% to 40% revenue to GDP, and we are yelling and shouting but we are paying 13% to 14% tax of GDP with a mindset of I pay for your child, your healthcare, I feed your child in school, I give him or her free SHS and that is not considered and we demand more”, he said.

“So 1.75% levy seems like climbing hills, who are we as a people? And where do we want to go as a people? So it’s not a bunch of politicians sitting unconcerned, not realising the moment in time we are in as a nation to have a conversation to say what is the sacrifice we must do”, he stressed.

The argument about the 1.75% E-Levy is expected to intensify in the coming days as Parliament debate the levy and is probable approval.