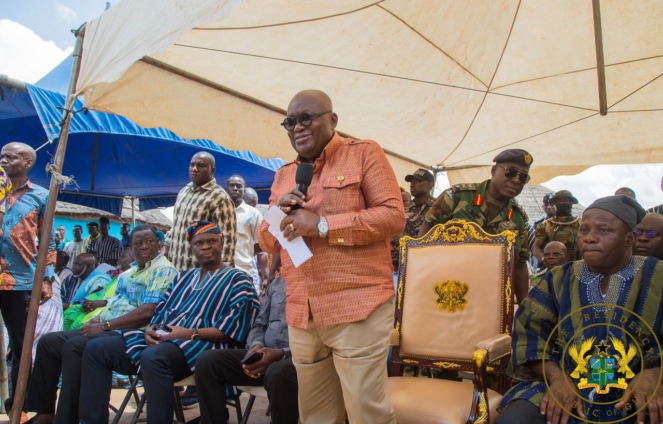 The overlord of Mamprugu Traditional Area and president of the North East Regional House of Chiefs, the Nayiri, Naa Bohagu Mahami Sheriga, has lauded President Akufo-Addo for his contribution to the region.

“You have done tremendously well. You have done what most Governments have not been able to do for the people of Mamprugu; for that matter, your name and footprints will remain indelible in Mamprugu, even for generations unborn. May God help you and thank you very much,” he said.

He said this when he joined President Nana Akufo-Addo to commission the new Regional Coordinating Council Administration Block in the North Eastern Regional capital of Nalerigu.

Conveying a note of appreciation to the President on Saturday, 6th August 2022, the Nayiri said “I am particularly happy to be part of this event, for it gives me the opportunity to personally express my utmost profound gratitude and appreciation, and that of the entire citizens of Mamprugu, to you the President, for the continuous effort to see to the development of this region.”

Indeed, he continued, “since you assumed office as the President of this nation, and with the able support of your Vice President, Dr Mahamudu Bawumia, the North East Region has had its fair share of the national cake.”

He added that “your presence amplifies your commitment to bringing governance and development to the doorstep of the citizens, as you promised, since your assumption into office as President of the state.”

Additionally, he added that “sod has been cut by the Vice President, Dr Mahamudu Bawumia, for the construction of a dual carriage road from Pigu in Savelugu District to Walewale District.

“Again, we can mention the newly built Youth Employment Regional Office, and construction has also been completed for the District courts at Nalerigu, Gambaga, and Walewale, and the construction of a Bus Terminal along Nalerigu – Nankpanduri road, and that of the Integrated Recycling Plant at Sagadugu, as well as well as the Pwalugu Multi-Purpose Dam Project.”