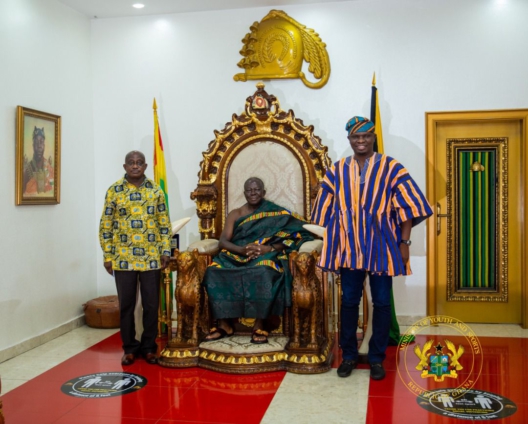 The Asantehene, Otumfou Osei Tutu II has urged the Minister for Youth and Sports, Mustapha Ussif, to replicate his good works at the National Service Scheme at his new office.

His Majesty made the call during the Minister’s visit to the Manhyia Palace on Friday, September 17, as part of his working tour of the Ashanti Region.

The Asantehene revealed that, he had been following the exploits of Mr. Ussif at his previous post as Executive Director of the NSS, adding that he performed exceptionally well by introducing innovative measures and policies that won him accolades among Ghanaian youth.

“I have been following you for years now. Your days at the National Service Scheme and now as Sports Minister. The way you transformed your previous office gives me hope about your capabilities. I know you will succeed and make Ghana proud. I am solidly behind you for success,” Otumfuo Osei Tutu II told Mustapha Ussif.

On his new role, His Majesty admonished Mustapha Ussif to channel resources towards other sporting activities to ensure growth in all sectors of sports.

In this regard, Azuma Nelson, D.K Poison, Isaac Anim, among others were mentioned by his Majesty as sportsmen who lifted high the flag of the country in their various disciplines and deserve applauds.

The Minister thanked his Majesty for the warm reception and his numerous contribution to sports development and the development of the country at large.

He also disclosed his purpose of visit and sought the Asantehene’s guidance and blessing to begin his working tour of the region.

He indicated that the facility is ready for use and will soon be handed over to the National Sports Authority by the contractor.

The Baba Yara Sports Stadium which serves as a training ground for Kumasi Asante Kotoko, King Faisal and other lower-division clubs was closed for renovation in February 2020.

Phase 1 of the project saw the grassing of the pitch, laying of tartan tracks, fixing of spectator seats, fixing of an underground pitch drainage system, installation of scoreboard and floodlights among others.

DISCLAIMER: The Views, Comments, Opinions, Contributions and Statements made by Readers and Contributors on this platform do not necessarily represent the views or policy of Multimedia Group Limited.
Tags:
Asantehene Otumfuo Osei Tutu
Minister for Youth and Sports
Mustapha Ussif