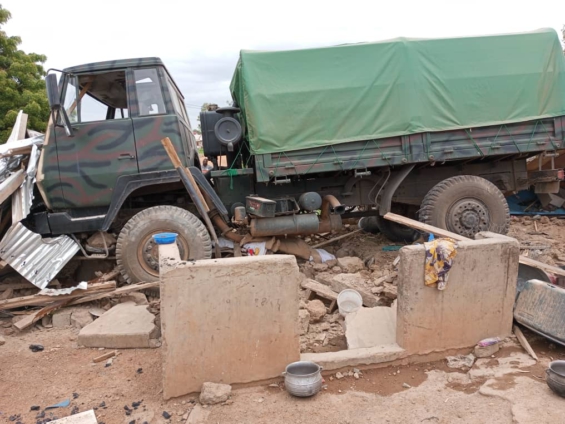 An accident involving a military truck at Zebilla, near the Custom Barrier in the Bawku West District of the Upper East Region has caused the death of one person. Three others are injured.

The truck, traveling from Bolga to Bawku rammed into shops and containers along the stretch.

Eyewitnesses told Adom News that the truck hit a pothole, causing the driver to lose control and veer off the road.

A motor rider, who was riding in front of the military truck, was hit from behind, killing him instantly. Three military men were injured in the process.

Some vendors rushed for safety after the truck rammed into their shops before screeching to a halt.

Motorbikes parked along the road were also destroyed.

The incident caused a massive gridlock, but the Zebilla District Police Command, NADMO and the soldiers arrived at the scene to control the traffic.

Meanwhile, residents of Zebilla are appealing to the contractor, Quiroz Galvao, working on the Bolga- Pulmakom road to immediately fix speed ramps in the township to prevent similar accidents.