12 million Ghanaians could soon be exposed to coronavirus - Virologist - MyJoyOnline.com

12 million Ghanaians could soon be exposed to coronavirus – Virologist 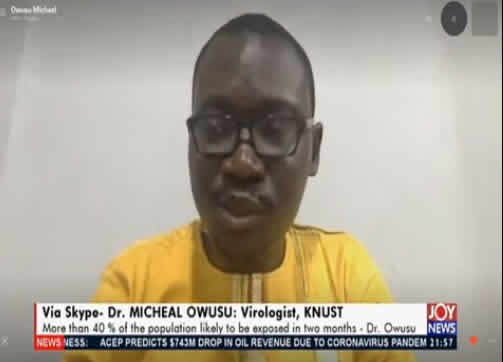 A virologist at the Kwame Nkrumah University of Science and Technology (KNUST), Dr Michael Owusu, says close to 40% of Ghana’s population could become exposed to the deadly coronavirus within the next couple of months.

This estimation is dependent on the current trend infection rate of the viral infection also known as COVID-19, as well as the fluidity in the movements of people through commercial transport system and societal associations.

The total population of the country is estimated at about 31million and going by the analysis of the expert, over 12 million people could find themselves in a vulnerable position of coming into contact with the new coronavirus.

“If you look at the infectivity of the virus, and the fact that as we speak now, because of our social structure, we still have some form of mingling ongoing…we should expect that close to 40% of people will be exposed in the next one month or two if the trend goes on as it is going because the virus spreads…very fast,” Dr Owusu told Evans Mensah, host of PM Express on JoyNews on Monday.

His projection means the country would require more kits to enable persons who exhibit symptoms of the COVID-19 to submit themselves for testing.

According to him, the procurement of 50,000 test kits recently announced by President Nana Akufo-Addo, “is a good step but it is not enough” because the Noguchi Memorial Institute for Medical Research (NMIMR) alone could need about 300,000 of them to carry out tests for people in and around the Greater Accra Region.

For the Kumasi Centre for Collaborative Research (KCCR), the other testing centre in the Ashanti Region, Dr Owusu estimates not less than 200,000 of the kits would be needed there.

Deputy Health Minister, Alexander Abban, who was also on the programme, said the government is making everything possible to ensure needed equipment are made available to frontline health staff to manage current cases while stepping up measures to contain the spread.

As of Monday, March 23, the country had recorded 27 persons who tested positive for the new coronavirus while two persons have died.

The two deaths, according to the Ghana Health Service, were recorded in the Ashanti Region.

The Deputy Minister said while the government is certain of recording a reduction in the number of ‘imported cases’ as a result of the decision to shut all entry points to the country, it is worried about a possible escalation in local transmissions because “that is exactly what we all fear.”

He added that “what is making it even scarier is the fact that…the virus can be airborne for as long as 8 hours.”

Watch the full discussion below