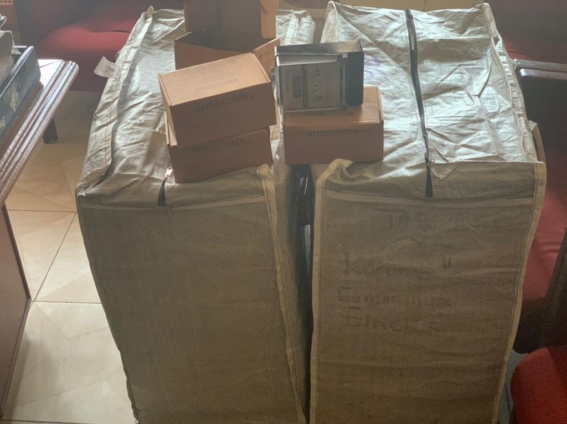 A military team stationed at the Ghana-Togo border has intercepted 192 fake meters at the Kumasi bus terminal, at the Aflao station, in the Ketu South Municipality.

They acted on intelligence gathered to intercept the illegal meters which had been smuggled into Ghana from Togo and were being loaded by two male suspects on a Kumasi bound VIP bus.

The two suspects were apprehended and handed over to the Aflao District Police command for further interrogation and investigation.

“Upon interrogation by the police, one of the suspects revealed that the 192 meters were being sent to Kumasi”, stated a communique copied to Myjoyonline.com

The ECG Volta Regional General Manager, Emmanuel Lumor, said the company’s surveillance over the past months revealed that efforts are being made “to infiltrate our stable electricity distribution network with illegal meters”.

He said their findings also indicated that the illegal and fake meters are being smuggled into the country from Togo by people who are not licensed under the Public Utility Act by the Energy Commission to possess or install electricity distribution meters.

“Such people do not have the mandate to import meters and do so illegally to affect the financial health of the company. Their actions are unacceptable and must be condemned by our cherished customers and the general public.”

“We have discovered that they are selling the meters at exorbitant fees to the detriment of unsuspecting customers”, he added.

He said further findings indicate that the meters are substandard, of low quality, consume a lot more electricity, and could cause fire outbreaks easily since there won’t be installed by a professional.

He detailed that “the low-quality nature of the meters causes the company to replace them after detection at a higher cost to the company and this affects the financial health of the company”.

Mr. Lumor illustrated that the installation of the fake meters would lead to an increase in the system losses since the company would be unable to bill these customers.

“In some instances, after replacing the meters with quality meters and the debt is transferred to the new meter, some customers find it difficult to pay accrued bills and this affects the revenue of the company”, he further explained.

He also indicated that the installation of the fake meters would affect the distribution system by overloading transformers which eventually leads to the breakdown of transformers and power outages.

“When people connect to the national grid illegally, it overloads our transformers and leads to low voltage and interruption of power supply to our cherished customers”.

“In view of this, we urge our cherished customers and the general public to condemn the activities of these people by desisting from acquiring meters from other sources except ECG and reporting such people to the nearest police station or ECG Office. Customers are advised to demand ECG receipts anytime they patronize our services.”

“The arrest of these two suspects is a step in the right direction to curbing the menace of the importation of fake meters from Togo and other sources”, he stressed.