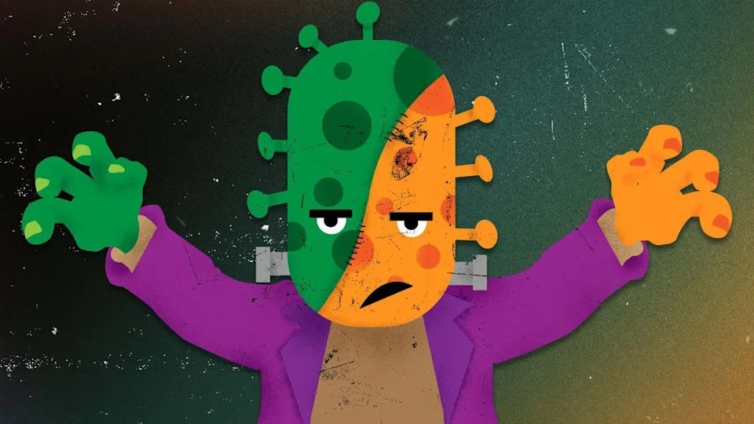 The first subvariant of Omicron, the latest major variant of the novel coronavirus, was bad. BA.1 drove record cases and hospitalizations in many countries starting last fall.

The second subvariant, BA.2, was worse in some countries-setting new records for daily cases across China and parts of Europe.

Now BA.1 and BA.2 have combined to create a third subvariant. XE, as it’s known, is a “recombinant”-the product of two viruses interacting “Frankenstein”-style in a single host.

With its long list of mutations, XE could be the most contagious form of the coronavirus yet. “From the WHO reports, it does appear to have a bit more of an edge in terms of transmissibility,” Stephanie James, the head of a Covid testing lab at Regis University in Colorado, told The Daily Beast.

But don’t panic just yet. The same mix of subvariants that produced XE might also protect us from it. Coming so quickly after the surge of BA.1 and BA.2 cases, XE is on track to hit a wall of natural immunity-the antibodies leftover from past infections in hundreds of millions of people.

Those natural antibodies, plus the additional protection afforded by the various Covid vaccines, could blunt XE’s impact. For that reason, many experts worry less about XE and more about whatever variant or subvariant might come after XE.

Testers first detected XE in the United Kingdom back in mid-January. Six weeks later U.K. authorities had identified 600 XE infections. Those cases are a proverbial drop in the bucket in light of the millions of BA.1 and BA.2 cases the U.K. has tallied in the past three months. But XE stood out.

There’s a lot of uncertainty about XE. The WHO stressed that its own finding about the subvariant “requires further confirmation.” But given what we think we know, it seems XE evolved in someone with overlapping BA.1 and BA.2 infections, when two separate but related viruses swapped genetic material.

XE isn’t the first COVID recombinant—there have been at least two others, including the so-called “Deltacron” subvariant that sprang from simultaneous Delta and BA.1 infections. But with two highly contagious parent viruses, XE stands a chance of being the fastest-spreading recombinant. Health officials have also detected XE in Thailand.

The subvariant hasn’t shown up in U.S. tests yet. But that doesn’t mean it hasn’t reached U.S. shores. “It might not be detected by the standard analysis pipeline,” Rob Knight, the head of a genetic-computation lab at the University of California, San Diego, told The Daily Beast. Major new forms of SARS-CoV-2 can require tweaks to testing methods.

XE is a nasty bug, owing to potentially dozens of mutations to its spike protein, the part of the virus that helps it grab onto and infect our cells. And it’s a strong reminder that the pandemic isn’t over. Even with widespread natural immunity and highly effective and safe vaccines, SARS-CoV-2 keeps finding pockets of unprotected people-and opportunities to evolve.

But it’s not 2020 anymore. The novel coronavirus has changed, but so have we. Each successive wave of infections—Alpha then Delta then both major forms of Omicron-has seeded the population with natural antibodies that offer strong, albeit temporary, protection against the worst effects of future infection by a related form of the virus.

The leading vaccines, meanwhile, have stood up to each new variant and subvariant, especially when you add one or two booster doses.

Even as more and more countries fully reopen schools, businesses and borders, the peak death rate from a COVID wave keeps dropping in a lot of countries. Cases might go up as some new subvariant outcompetes an earlier subvariant and becomes dominant. But deaths don’t necessarily increase in the same proportion—a phenomenon epidemiologists call “decoupling.”

Decoupling is partially a function of the time between waves. Natural antibodies from past infection can begin fading after three months. But if two variants or subvariants strike within a few months of each other, the second strain collides with the immunity left over from the first strain-especially if the strains are related. Meanwhile, the second strain produces antibodies that could mitigate the worst outcomes of the next strain, assuming it arrives fast enough.

That’s why Omicron has infected more people than the previous variant, Delta, but has killed fewer. And why many experts consider XE less frightening than BA.2 or BA.1. “Immune responses to XE should be similar to that of Omicron,” Bortz said. “Those with prior Omicron infection and vaccination are going to be mostly immune.”

By the same token, a big gap between separate variants-that is, a long reprieve from COVID-might actually be more dangerous to a population than back-to-back-to-back waves of related strains.

There’s another risk. We were lucky with the major variants and subvariants before XE, in that the leading vaccines worked really well against all of them. Experts are cautiously optimistic that the jabs hold up against XE, too. “XE is, as you say, supposed to be more contagious than BA.2 [or] BA.1,” Edwin Michael, an epidemiologist at the Center for Global Health Infectious Disease Research at the University of South Florida, told The Daily Beast, “but it seems not to be more severe or immune-evasive.”

But if some new variant, perhaps even a recombinant of XE and some other strain, eventually mutates in a way that helps it evade the vaccines and arrives three months or longer after the previous surge in cases, we could be in trouble.

“While thus far mutants that are more transmissible have emerged and spread, there is also the possibility of one that is both more transmissible and immune-evasive to emerge,” Michael said. In that case, neither of our approaches to building population-level immunity–vaccines and natural antibodies-would be able to prevent a devastating spike in deaths.

“We should expect several additional subvariants to come out of this, but which ones accelerate–and where–right now seems uncharted,” Peter Hotez, an expert in vaccine development at Baylor College, told The Daily Beast. “We don’t have a roadmap.”

To reduce the likelihood of the worst outcomes, we need to reduce the coronavirus’s opportunities for mutating. That means shrinking the unprotected population. How we can do this is obvious. “Vaccines are the best way to prevent serious disease,” James said.

Getting jabbed doesn’t just protect you as an individual against serious infection-it also protects the people around you from whatever new variant, subvariant, or recombinant you might mutate in the laboratory of your own body.