2 in police grips for alleged premix diversion in Keta - MyJoyOnline.com

2 in police grips for alleged premix diversion in Keta 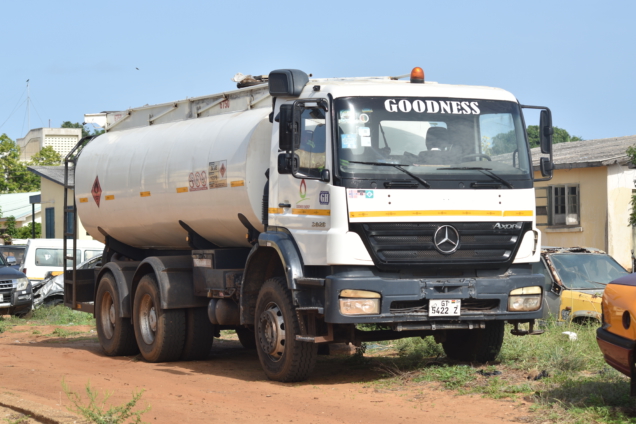 Some two persons have been arrested by the Keta Police for their involvement in the alleged diversion of premix fuel meant for Keta fisherfolks in the Volta Region.

A driver and the Secretary of the Nukpesekope Landing Beach Committee, Jeoffrey James Ocloo, were picked up on Tuesday morning in the Keta Municipality.

The two are currently helping the police investigations to unravel the case.

According to Augustine Ocloo, a resident in Keta, he was informed that a Goodness Energy fuel tanker with registration number, GT 5422 Z, was spotted parked around the Nukpesekope premix fuel depot on Tuesday morning.

He said the driver, however, drove off without discharging fuel, a development which rose suspicion of residents of a possible diversion.

“We detailed a vehicle to monitor the tanker. What is surprising is that the Nukpesekope Landing Beach Committee Secretary, Jeoffrey James Ocloo, who is close to the MCE had signed the waybill. The Chief fisherman who is sick and bedridden had his portion also signed”, he narrated.

“We monitored the tanker, which stopped at Afiadenyigba junction, moved and stopped at Avalavi, then to Abor. We, therefore, concluded that the fuel had been diverted so we called in the Police who arrested the driver.”

He further indicated that “the driver then called suspect Jeoffrey James Ocloo who upon arriving at the scene said ‘the issue should be settled here’, but I objected to his suggestion and indicated that we must find where the fuel was sent. Already, the seal on the tanker was broken”.

Jeoffery was subsequently arrested together with the driver and sent to the Keta Police Station, where the two were put behind bars.

The Goodness Energy tanker is also parked at the premises of the Keta Divisional Police Command.

The Keta Divisional Police Commander, Chief Supt Leonard Abakah, declined to comment on the case indicating that he had just received the docket of the case hence would need time to study it before speaking to the media, when Joy News contacted him.

Residents are, however, demanding the National Premix Committee investigate the distribution of fuel to the Keta Municipality within the last 3 months.

They are of the conviction that the majority of the fuel meant for Keta Municipality fisherfolks might have been diverted for the parochial gains of a few.

“We residents of Keta rely heavily on fishing to support our livelihood but we hardly get supply of the fuel. We are suspecting the fuel meant for us were diverted, the authorities must investigate this”, said Senyo Christian Mawulorm, a Mofa Rep on the Nukpesekope Premix Committee

The Keta Municipal Chief Executive, Emmanuel Gemegah, acknowledged receipt of the news of the alleged premix fuel diversion but said he can’t speak to the media about the incident until he returns to Keta.

“I am currently in Accra in a meeting with authorities at the Ghana Ports and Harbors Authority. I don’t have enough information so I can’t speak to the incident until I return to Keta”, he said to Fred Quame Asare in a telephone conversation.