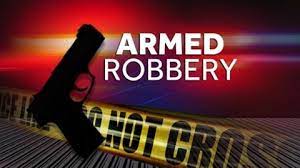 Two Nigerians who planned and executed a robbery act in Kumasi have been slapped with a 20-year jail term by the Akropong Circuit Court.

Samuel Kalu, 22 and Ameka Okpala, 26, from Abia and Anambra States respectively, were unsuccessful and could not run with their booty of GHC15,000 they robbed from a man they trailed from a bank at Abrepo Junction.

Kalu arrived in Kumasi from Nigeria the same morning he embarked on the robbery, while Ameka arrived a week earlier to commit the crime.

Police say the two lodged at a Guest House at Abirem near Kenyasi.

The victim, Emmanuel Addo Agyei, was attacked by the convicts moments after he withdrew the money May 30, 2022.

The convicts, lurking around a nearby fuel station, pushed their victim onto the ground and attempted to speed off on a waiting motorbike.

Luck however eluded them when a driver’s mate monitoring the situation from a nearby spot, raised alarm and pulled the pillion rider from his bike.

Some commercial drivers who were attracted to the scene blocked the suspects’ motorbike, and attempted to lynch them.

The Suame Divisional Police intervened to rescue the two who were later transferred to the Regional CID.

The two Nigerians were arraigned on conspiracy to commit robbery and robbery charges.

On Thursday, June 3, 2022, the duo were jailed 20 years each in hard labour by the Akropong Circuit Court presided by Judge Nana Brew. The Presiding Judge, before the sentencing, advised the public to be extra careful with their security, especially after withdrawing money from the bank.