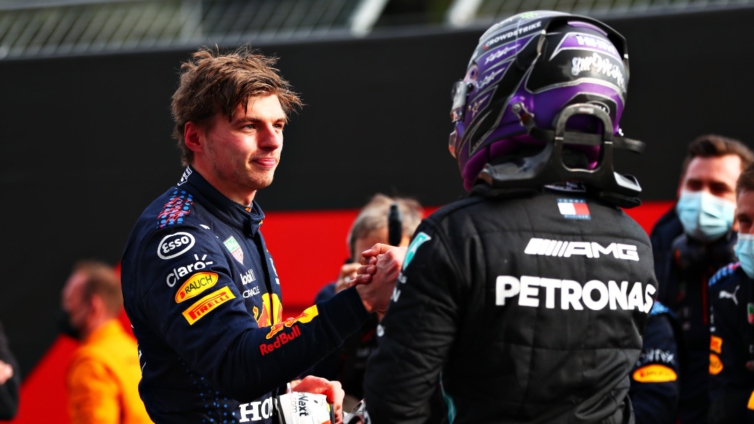 The return of F1 to Imola was chaotic and scrappy but was one Max Verstappen will cherish so much after securing his 11th race win in his Formula 1 career.

In a race which witnessed a Mercedes scare, England being represented on the podium 700 times and the two top constructors ending the race with mixed feelings, here are 5 things we picked up from the Imola GP.

Before that however, McLaren and Ferrari engaged in entertainment of their own, with all four of their drivers pushing their wits ends, again after what happened in the season’s opener at Bahrain.

Imola hit its lowest, following the separate crashes and deaths of Ayrton Senna and Roland Ratzenberger in 1994.
This year’s Imola GP was marked with confusion between drivers and engineers as to tyres needed, as rainfall welcomed F1 back to Imola right before the cars could get out on the grid.

Even before lights could go out at Imola, two-time world champion, Alonso spun off the circuit and into a barrier, breaking his front wing in the process. As if unpredicted heavy rain and Alonso’s spin were not enough, Lance Stroll’s rear brake tyre caught fire while Bottas suffered a puncture to his tyre – not the last of bad luck the Finn was going to experience in the race.

The race witnessed a red flag after the 30th lap, as Bottas and William’s Russell were involved in a high-speed crash, with both racers shifting blame on the other. Before that crash however, Hamilton spun into the gravel after misjudging an overtake in an attempt to out-lap George Russell, in his chase after Max Verstappen.
Before that moment however, there was high-adrenaline in only the first lap of the race, as Hamilton and Verstappen were involved in a high-tempo duel which saw the Dutch take the lead from the Brit, but also take off a part of his front-wing in the process.

McLaren look to be one of the midfield teams to push the limits of the top three F1 teams this year. The McLaren drivers, Lando Norris and Daniel Ricciardo finished the Bahrain GP in 4th and 7th respectively.

That performance was topped at Imola with Norris climbing into 3rd and Ricciardo into 6th. Norris finished the race as the Driver of the Day with his stellar run and even though he was overtaken by Hamilton who had to run out from 9th place after the red flag, Norris won the hearts of many in how he held-out the seven-time world champion before the 60th lap.

Norris is currently 3rd with Ricciardo 6th, in the drivers’ standings while McLaren sit 3rd in the constructor’s championship with 18 points, 6 more than Ferrari.

It’s just the 2nd race of the season, but the English team will love how it is already going.

Beside the McLaren dream, Ferrari’s attempt at redemption after a very poor 2020 looks to be in the works.

Their first run of the 2021 season saw them finish 6th and 8th and at Imola even under very chaotic situations, Leclerc and Sainz moved into 4th and 5th. Just at it happened at Bahrain, the Ferrari pair were involved in sub-plot race stories with Sainz and Pierre Gasly of AlphaTauri involved in a duel of their own early on in the race, while Leclerc looked to also apply the pressure on Hamilton.

As Ferrari sit 4th in the constructor’s championship, they have Leclerc and Sainz in 4th and 5th respectively with 12 and 10 points.

Mercedes will need more from Bottas

Bottas has not had an encouraging start to the season although he finished 3rd at Bahrain. He could have finished better if not for a faulty pit stop but the Finn will have appreciated pit stop challenges at Imola, considering the issues he faced in Italy.

Bottas had a poor qualifying run and starting from 8th on the grid meant, he could not offer any form of support to Hamilton who had the two Red Bulls ganging up against him. Bottas even dropped into 10th during the early moments of the race and that was the least of his issues on Sunday afternoon.

The Finn was involved in a top-speed crush with fellow Mercedes signee, Russell of Williams on the way to being overtaken by the Brit. Bottas came off worse from the incident with injury scares and had to be taken to the medics after the incident.

With Red Bull breathing down hard on the neck of Mercedes, they will require their Finnish driver to put on more, no criticism to Bottas though. He is a good racer, but with Red Bull’s Perez seemingly susceptible to mistakes after he bottled a P2 grid start to finish 12th, Mercedes will need Bottas to bring his A game to help them develop a solid one over their German counterparts who are 13 points behind them in the constructors’ standings.

This may sound silly but if there were any doubts of the natural speed of the seven-time world champion, his surge from 9th to a P2 finish squashed any doubts of his talent.

Surprisingly, some section of F1 fans for some funny reason of sorts have become adamant in accepting the Brit’s talent, and levelled his success on the recent dominance of Mercedes. However, the driver having to restart from 9th after the red flag, showed resilience and lots of speed to get back to a podium finish. He overtook seven cars on his way to 2nd, including a very stubborn Lando Norris who secured the second podium finish of his career.

Formula 1 after what could be the most chaotic of races this season, will return on the 2nd of May with the Portuguese Grand Prix.