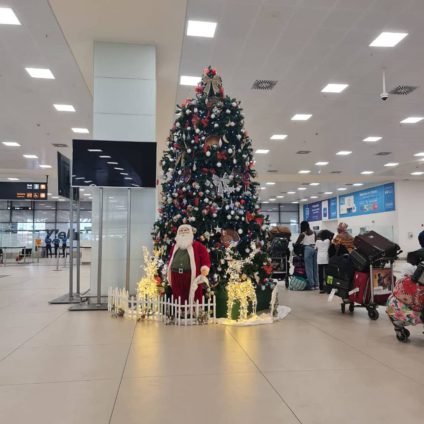 Co-Chair of Citizens Movement Against Corruption, Edem Senanu has advised the Board Chairman of the Ghana Airports Company Limited (GACL) to stop defending his involvement in the procurement of Christmas decor for the Kotoka International Airport (KIA).

Paul Adom-Otchere had earlier explained that his involvement in the procurement of the décor was to ensure prudent spending.

In an editorial on Accra-based Metro TV, he explained that the viral photo of an invoice of GH¢82,000 for the Christmas tree inspirations does not reflect the actual situation on the ground.

But the GACL Board Chairman said the inspirations at Terminal 2 and Terminal 3 initially cost about ¢128,000.

He, however, suggested that the advertising company, DPP Outdoor, decided to bear GH¢50,000 of that, leaving the State to pay about GH¢78,000.

“We didn’t use this invoice, and people have gone around and talked about the cost on this invoice being the cost of the inspirations. That is totally wrong because this invoice is the one that has four Christmas trees for GH¢84,000,” he said on Tuesday, January 11, 2022.

This, he said, makes the cost far lower than what was spent in 2016 on just Terminal 2.

But Speaking on Top Story on Wednesday, Edem Senanu noted that it was needless for Mr Adom-Otchere to have engaged in the transaction.

“I think that the less Paul speaks, the better. The institution is set up to have a procurement unit and the processes in that unit will involve doing the value for money audit by checking for let’s say, three or more markets to compare the market average and then decide that this particular service or product gives us value for money.

“It has nothing to do with the Board, so there is no way he can say he was doing the value for money audit. This is a very strange comment,” he stressed.

Mr Senanu, however, commended the Company for spending less than what was spent in 2016 on Christmas décor at Terminal 2.

“We can commend the staff of Ghana Airport Company Limited for ensuring that they spent less than they spent in earlier years.

“However, the processes must still fall in line with procurement requirements and it could not have varied to the extent that a Board Chairman is the one inviting or soliciting requests for proposals or invoices and his name should be on it,” he added.

Meanwhile, the Minority in Parliament has indicated their intentions to file an urgent question to the Transport Minister on the procurement processes employed by the GACL in the acquisition of the Christmas tree inspirations.

DISCLAIMER: The Views, Comments, Opinions, Contributions and Statements made by Readers and Contributors on this platform do not necessarily represent the views or policy of Multimedia Group Limited.
Tags:
Edem Senanu
KIA
Paul Adom-Otchere