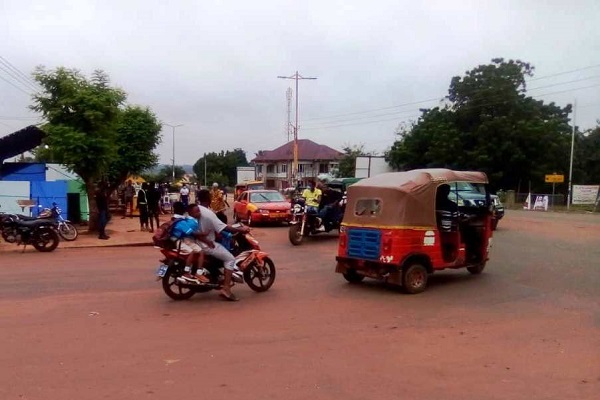 According to him, carrying three or more passengers has been the cause of over 60% of road accident deaths in the region even more than private and passenger cars during the year 2021.

Mr Acheampong-Parry in an interview at Techiman revealed that the Bono East Regional NRSA in 2021 recorded a total of 288 accidents involving 537 vehicles which resulted in 129 deaths.

The Bono East Regional Director of the NRSA further indicated that road accident cases in the Bono East region for the year 2021 generally saw a slight increase as against the previous year 2020.

A  situation, he described as worrisome despite the numerous educational programs.

Mr Acheampong-Parry said the NRSA is partnering with the Motor Transport and Traffic Department (MTTD) of the Ghana Police Service, the Driver and Vehicle Licensing Authority (DVLA) and other stakeholders to come up with new strategies to help reverse the situation.

“We have targeted the motorbike, Pragya and aboboyaa riders in the Bono East region for sensitisation and possible prosecution in case they flout the road traffic regulations.

“Our renewed strategy this year will enable us to quickly halt this menace which poses a serious threat to the lives of the good people of the region,” he stressed.

DISCLAIMER: The Views, Comments, Opinions, Contributions and Statements made by Readers and Contributors on this platform do not necessarily represent the views or policy of Multimedia Group Limited.
Tags:
Motor Traffic and Transport Department (MTTD)
National Road Safety Authority (NRSA)
Road accidents