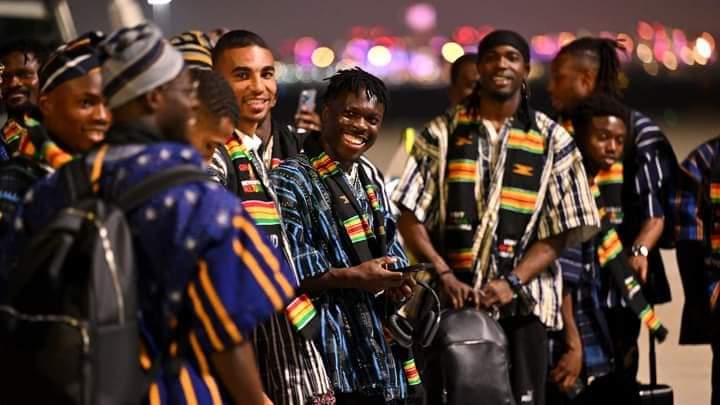 With two more days for the 2022 FIFA World Cup to kick off, the senior national team, the Black Stars of Ghana, have touched based in Qatar in a colorful traditional fashion.

In a series of blissful shots on social media, the team was spotted in nice ‘fugu’ outfits, amidst buoyant smiles and heightened euphoria.

The unique adornment by the Black Stars has subsequently triggered tons of compliments across social media, with many applauding the Stars for choosing to make a statement about their African origin.

From the goalkeepers right down to the other members of the twenty-six man squad, the players were also seen in beautifully woven kente sashes, hanging around their necks.

Many have therefore praised the team for approaching their dressing in a whole new style.

This is the first time the team has made such a traditional showing at the start of any big tournament they have participated in.

Having arrived in Qatar, the players will be lacing their boots to face Portugal in their first Group H fixture on Thursday, 24th November, 2022, at Stadium 974 (Rass Abou Aboud).

This will be followed by another duel against old foes Uruguay; followed by their last group encounter against South Korea.

Manager of the side, Otto Addo, believes his side has what it takes to surmount their opponents and give a good show on the world stage.

Meanwhile, former President, John Mahama, has urged the senior national team to give off their best in the upcoming FIFA World Cup tournament in Qatar.

Ahead of the eventual kick off, the former head of state took to his Facebook wall on Thursday to inject a dose of encouragement into the Black Stars.

In his motivational post, Mahama noted that since time immemorial, the Black Stars have given a good account of themselves on the global scene.

According to him, the team’s ‘unique brand of football’ has always amazed the world, hence his belief in the chances of the team ahead of the mundial in Qatar.

Touting the achievements of the Stars in recent times, he called on Ghanaians to rally behind the team, as they face the world.

DISCLAIMER: The Views, Comments, Opinions, Contributions and Statements made by Readers and Contributors on this platform do not necessarily represent the views or policy of Multimedia Group Limited.
Tags:
Black Stars
Fugu
Kente
Qatar 2022 World Cup
Saches
World Cup 2022