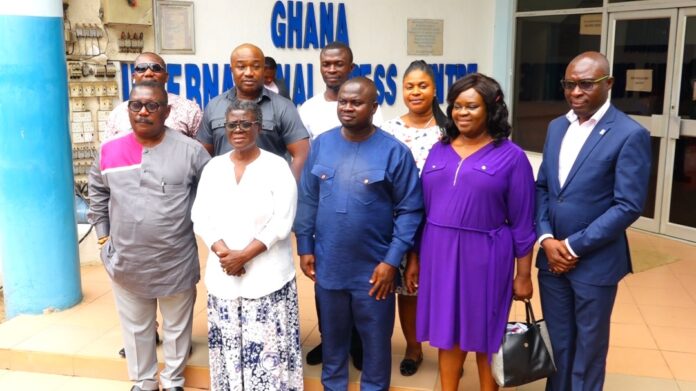 This year’s GJA Media Awards will be held on November 12, 2022, at the Kempinski Hotel Gold Coast City.

The theme for this year’s Awards is:  “Walking The Path Towards Economic Recovery: The Role Of The Media”.

This time, journalists are entreated to file their stories on the GJA online platform which will be activated on Thursday, September 1, 2022.

They are expected to file stories written only in 2021 and not 2022 and as well be members of the GJA.

Speaking at the launch, the GJA President, Mr. Albert Kwabena Dwumfour explained that last year, the GJA was unable to organise the awards due to circumstances beyond its control.

However, he said the Association started preparations very early this year so that it does not miss out this time around.

He said this year, the Association is decoupling the GJA Awards from the Dinner event so that the GJA Can have two major programmes within the year.

First, he said the GJA Awards which will be a cocktail ceremony would be held, and then later in December, the annual GJA Dinner night, which will be more of a socialization event where industry players and GJA’s corporate partners get the time to meet and socialize.

“One significant thing about this year’s Awards is the fact the GJA Journalist of the Year is very competitive as the winner is going to be selected based on competitive entries. This is a departure from the practice whereby the Awards Committee selected a winner in consultation with the National Executive,” the GJA President stated.

To make the awards more competitive and relevant, he said the GJA has reduced the number of awards from over 50 to about 36.

He therefore, urged all journalists who believe their works meet the criteria set out by the Awards Committee to file their entries, assuring them that the process will be fair and transparent.

“This year’s awards promises to be great and exciting and I can assure you that it will also be controversy-free. I trust this Awards committee, which is made up of men and women of integrity, to do a good job at the end of the day.

We will ensure that deserving and hardworking journalists are duly honored on that day,” he added.

Speaking about the theme for the awards, Mr Dwumfour believed that the theme was apt due to the current economic challenges Ghana is facing now.

“Indeed, there couldn’t have been any better theme. I hold the view that, as journalists, we have a role to play in ensuring that the economy is stabilized for our common good. We can do this in many ways,” he said.

He continued that, “Firstly, as watchdogs of society, we must just ensure that the government or any state institution does not spend outside their budget or engage in any frivolous expenditure. When we focus on these things, we can help the government achieve fiscal stability.”

I believe that if journalists manage to focus on the Auditor General’s Report and ensure that the findings are fully implemented, this country will save millions of cedis every year, which we can channel into programmes like Free SHS, the School Feeding Programme, etc.”

He also urged journalists to encourage all citizens and businesses to pay their taxes for national development.

DISCLAIMER: The Views, Comments, Opinions, Contributions and Statements made by Readers and Contributors on this platform do not necessarily represent the views or policy of Multimedia Group Limited.
Tags:
Ghana Journalists Association (GJA)
GJA Media