279 Ghanaians, 107 foreigners arrested in a joint security operation in 5 regions of the North - MyJoyOnline.com

279 Ghanaians, 107 foreigners arrested in a joint security operation in 5 regions of the North 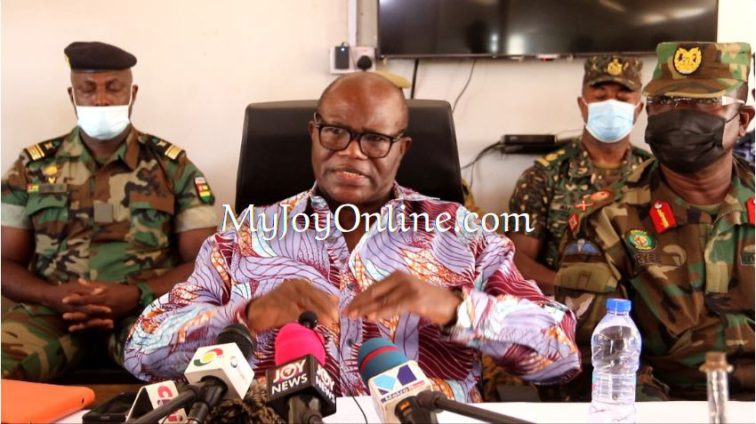 The National Security Adviser, Emmanuel Okyere has disclosed that a total of 279 Ghanaians and 107 foreigners comprising of Burkinabes, Nigerians, Negerians and Malians were arrested in a joint security operation.

He said the joint security operations were drawn from the various security services in the country and partnered by their counterparts from Burkina, Togo and Ivory Coast.

He said the modus operandi of the joint operation is to ward off terrorist, criminals and their elements from the country.

‘‘We are not waiting for any fire to get to us, we are doing whatever is possible to prevent that fire from getting to us. So, all that we are doing year in year out in these particular regions is to prevent any terrorist stacks n our land,’’ he stated at a press conference in Wa.

Sandwiched by the National Director of the National Intelligence Bureau (NIB), Kweku Dunfeh and the General Officer Commanding the Northern Command, Brigadier General Moses Aryee, said the persons were arrested for various crimes and will be screened and those found culpable will prosecuted.

Apart from the arrest, screening and protection of the suspect, the NIB also used the opportunity to sensitize the populace.

‘‘Security is a shared responsibility, it is not only for the security services, but it also affects the people of the entire country. So were in this together,’’ he added.

Having interacted with some communities about the challenges they faced, he noted water was a huge challenge for them. As a result, he disclosed that a number of boreholes will be drilled for those communities to ease their challenges.

Meanwhile, there is uneasy calm at some of the communities raided by personnel from the joint security operation.

At Manwe, located in the Wa East District life is gradually returning to normal after gun shots were fired forcing some of the residents to flee the community.

The community is known to have large deposits of gold and as a result had several illegal miners located there. Most equipment used for their illegal mining activities were destroyed and burnt.

In addition, a house accommodating 10 Burkinabes who were of Moshi extraction were arrested and had all window glasses to their rooms and personal belongings destroyed and burnt to ashes