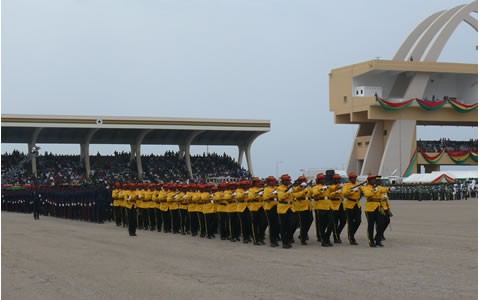 What is the name given to a country which in theory is independent, and has all the outward trappings of International Sovereignty called? How about one which has its economic system, and thus political policy directed from outside? That is the state Ghana became effectively 48 years ago. We hard dramatically swung from being at the vanguard of the fight against neo-colonialism to becoming its show piece, as the number one country in Africa which can be exploited with ease in absolute peace.

From being the Liberation Mecca of Africa, Ghana today has become a gutless parody of its original self of the early independence times. A classic exhibition of our obsolescence in clout was when the President of Ghana was consigned to the backgrounds, like just another guest, during that historic event of Nelson Mandela’s death.

About some six decades ago, we were the nemesis of any sort of empire minded considerations from external aggressors. We were the quintessential republic. But our country, right down from the cabinet to the president seems bought and paid for; apparently literarily and in the currency of docility, all embroidered in stark self deprecation.

Today, it seems unfashionable in the eyes of the Ghanaian to be your own man or woman. If boot-licking was sure to guarantee the contemporary Ghanaian a cup of milk today, then to hell with a thousand more that is certain to come just by staying true to his or her dignity. We have become a land of the improvident, a people who are chronically incapable of thinking about tomorrow. It is in this spirit that you find our leaders combing the globe for people to come think for them; to come help them bake their dough, and butter the national bread, all in the name of foreign investment. Once it is not foreign, in their eyes, it can’t possibly be good enough.

As Alexander the great is purported to have said, ‘I am more scared of an army of lambs led by a lion than an army of lions led by a lamb.’ The afore-going is an indication of the fact that with the right leadership, Ghana should be able to redeem itself from our current state of faded glory and political ignominy in the comity of the economically liberated. However, the paradox of Alexander’s quote is that, is it conceivable for an army of lambs to elect a lion to lead? Well, the answer to this in the Ghanaian context is better appreciated by observing how the masses of our people are quick to cling to slogans such as ‘Asomdwehene’ and the sorts during political elections.

Today, the economic puppet masters have made very gory examples of countries like Libya, Zimbabwe, Iran and others that sought to stand for their economic and political rights. Through the mass media, draconian economic sanctions and propaganda, they have highlighted these nations as agents of oppression and the purveyors of backwardness. As such, most of our masses (including the so called educated) have become conditioned with the status quo of western style ruler-ship; whether the outcome is desirable or not.

Any leader with a streak of verve is considered a brute unfit for the modern times. It is this sort of mind control that has made it all worthwhile for our leaders to sell out all our resources in perfect tranquility; without much of a finger being lifted in protest by the generality of our population.

The exploitative system has been well coded in two political parties whose allegiance is ultimately to one and the same master – Anyone who can offer a cup of milk today, in exchange for carting away a thousand or more from our country tomorrow.

In our naiveté, we feel it is the most reasonable thing to do by keeping either the NDC or NPP in power. In that same vein, we have lost our sense of ownership of this country, such that, we are willing to subject ourselves to who or whatever these parties propose as a leader; and willy-nilly we are sure to vote them into office, trudging along like sheep to the slaughter – completely oblivious of what lies ahead after they secure political power.

This has created a situation fundamental to the few controlling the many; in which the masses of Ghanaians police themselves and keep each other in line. The sheep become the sheepdog for the rest of the herd. So that when anyone expresses strong political sentiments outside of these two parties, one is rather seen as lost or non-pragmatic. But the question to be asked here is, what has been either commonsensical or even close to practical by the way these two political systems have toyed with this country till date?

Moving away from this NPP/NDC false dilemma is totally discouraged and scoffed at by the same masses who are quick to condemn these very politically parties. One wonders the kind of psychology at play here. It is like a prisoner trying to escape while the rest of his cellmates rush to stop him. If that happened, we would say the prisoners were crazy, how could they do that? But Ghanaians are doing precisely this to each other every day by coercing and even demanding that everyone conform to the political norms to which they blindly conform; Like David Icke said in his book Children of the Matrix – ‘This is nothing less than psychological fascism – the thought police with agents in every home, everywhere. Agents so deeply conditioned that most have no idea they are unpaid mind controllers’.

"I just don’t want to waste my vote" – you’ll hear them say.