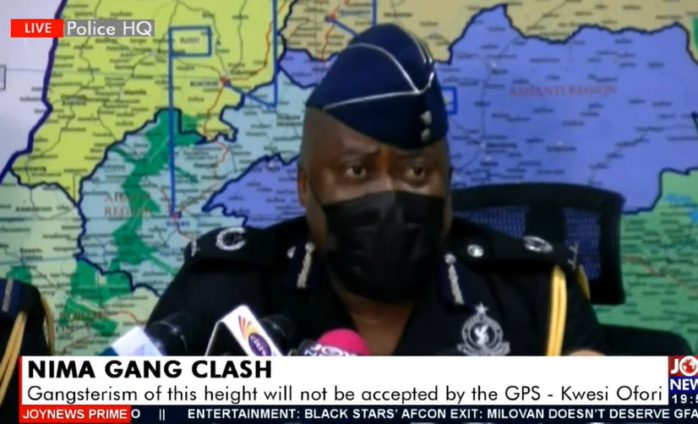 The Ghana Police Service has revealed that five persons were injured during the clash at Nima in the Greater Accra Region on Tuesday, January 18.

Addressing a press briefing at the National Operations Centre, Assistant Commissioner of Police, Kwesi Ofori said that out of the five, three of the persons were seriously injured.

“One person is at the 37 Military Hospital and two others are at the Police Hospital also being offered medical care. So far, our records indicate that no death has been recorded and our attentions also has not been drawn to any death in any of the hospitals,” he told the media.

ACP Ofori added that some of the gang members are nursing their health privately by refusing to seek medical attention from professional health care workers.

The police also announced that two more persons have been arrested bringing the total number of arrests to nine.

“The two people were arrested at Ashalaja. Thanks to the effective intel network of the police in collaboration with the people, we got two of them and weapons like pump action gun, a set of security uniform and unregistered motorbikes was retrieved from them,” he said.

ACP Ofori added that the suspects have been placed in police custody and they are assisting in investigations.

This comes after a timely intervention by the Police on Tuesday afternoon averted what could have been bloodshed following a violent clash between the youth of Nima and Maamobi.

In videos widely circulated on social media, the youth in the adjoining communities attacked each other with clubs and cutlasses around 3:00 pm.

The immediate cause of the clash is not known, however, JoyNews gathers that there’s been a long-standing feud between the youth of Nima and Maamobi.

Tensions had been brewing between the said factions until it escalated into Tuesday’s clash.

Meanwhile, the Police say they have placed a GH₵20,000 bounty on the leaders of the two groups, who were involved in the violent clashes.

ACP Kwesi Ofori stressed that the move is to incentivise the public to disclose all relevant information leading to their arrest and prosecution.

He added that the police have put in place measures and would not hesitate to rid Accra and the country of the menace of gangsterism.

He, therefore, charged the youth to refrain from such groups, and channel their energies into more productive ventures.