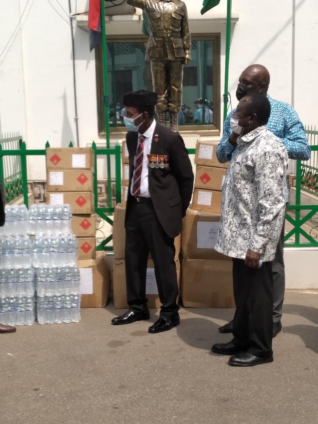 The items, donated through the Ministry of Health, are to protect health workers who play crucial roles at the forefront of the Covid-19 fight.

WOI Hammond raised the funds to procure the items, by walking a two-mile journey daily for seven days, in the quest to contribute to fighting the respiratory disease.

He said he believed the items would go a long way to complement the efforts of government, private entities and other individuals who had contributed in varied ways to combat the Covid-19.

WOI Hammond, a Ghanaian Second World War Veteran, said he was inspired to do something for his country just as he was inspired years ago to join the Burma campaign, which was a series of battles fought for the British empire and Gold Coast and better conditions of service for veterans.
Veterans are members of the Military who retired honorably and responsibly.

“I thank God for allowing me to tell my story and contribute my quota during this difficult period of Covid-19 to the nation,” he added.

The oldest-serving Veteran appealed to all to develop a sense of patriotism for the country and do something willingly to support her in “this critical time.”

“If you have so many degrees and you don’t do anything for your country, then you have missed the way. What inspired me to go to Burma to fight the war assiduously and ferociously, is the same spirit that inspired me to embark on this walk to achieve my aim.

“I’m advising everybody, die for your country not because of money or anything and if all of us can do that, then our country will have a bright future,” he said.

The Executive Director of VAG, Captain Ben Duah (Rtd) expressed excitement about the conduct of Ex WOI Ashitey, especially at the time when the President had reintroduced some restrictions in the wake of the second wave of the pandemic.

He said it was for the patriotism of Mr Ashitey for his country in his line of duty that won him the promotion to the rank of a WOI (Warrant Officer Class One), from a Private Soldier.

“It’s the first time a private soldier has been promoted to the rank of a Warrant Officer Class 1. It has never happened in the history of this nation and that shows his commitment to helping this nation to get a better future,” he said.

Captain Duah advised members of the public, especially health workers to strictly take maximum precaution by adhering to the Covid-19 safety protocols for the wellbeing of all.

Acting Chief Director at the Ministry of Health, Mr Kwabena Oku-Afari who received the items, expressed profound gratitude and satisfaction towards the gesture of the oldest Veteran.

“An almost 96-year-old man walking two-miles every day to raise funds to support his nation is something we should all applaud, because some of us when we walk for even 10 minutes, we will start complaining,” he said.

The Acting Chief Director said the gesture was a great symbol that had to be emulated by all, especially the youth.

He said Ex WOI Ashitey thought of the welfare of frontline health workers because he was also once at the fore front of a global fight and prayed for God’s blessings for him for a longer quality life.

DISCLAIMER: The Views, Comments, Opinions, Contributions and Statements made by Readers and Contributors on this platform do not necessarily represent the views or policy of Multimedia Group Limited.
Tags:
Covid-19
JoyNews
Ministry of Health