A ‘bathroom video’ shuts down an Indian institution 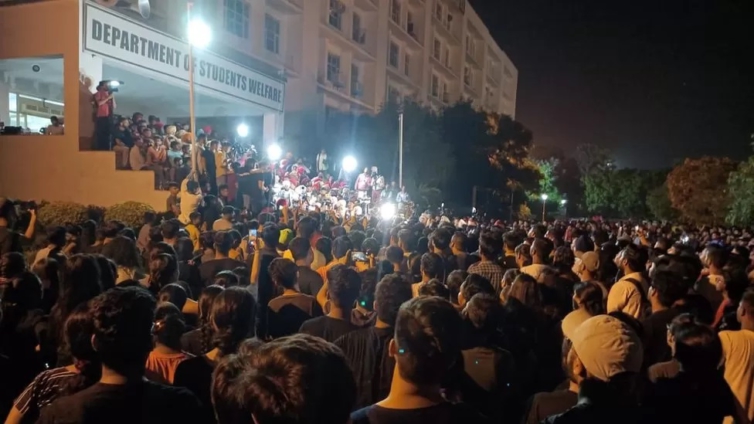 Protesting students alleged that a student had secretly filmed other women

An Indian university has been shut for a week after massive protests broke out over allegations that a female student secretly filmed other women in a hostel bathroom.

Thousands of students at Chandigarh University, a privately-run institution in the northern state of Punjab, protested on Sunday after rumours began spreading – both at the university and online – that several videos of women bathing had been posted on the internet without their knowledge. These, according to several tweets, had been filmed by the woman and shared with her boyfriend.

Both the university and the Punjab police have denied this. Police officials said on Sunday that they have only found videos of the woman on her phone, but she, her boyfriend and another man have since been arrested on charges that include sharing private photos of others without their consent.

“The investigation is underway and the accused’s phone has been sent for forensic examination,” said Rupinder Bhatti, a senior Punjab police official who heads a special investigation team looking into the case.

Ms Bhatti also denied a newspaper report which cited anonymous police officials who said that a second video, which appeared to be of another girl, had been found on the woman’s phone.

The students ended their protest late on Sunday after the administration and police accepted some of their demands. But it is still a trending topic online, where it had kickstarted a whirlwind of misinformation.

Pawan Duggal, cyber law expert, says that the case illustrates the challenges ahead of universities and other stakeholders when it comes to online misinformation.

“There needs to be a practical approach – closing universities is no solution,” he says.

Female students at the university told the BBC that irrespective of the facts, the distress they feel is real – some say they are disappointed by the way authorities have handled the issue.

The protests, which began late on Saturday, intensified the next day, taking the country by surprise. The story dominated the news cycle and social media conversations on Sunday.

The BBC spoke to five female students at the university – four spoke on condition of anonymity – to try and piece together the details.

One of them, Shikha (name changed on request), said she was in her dormitory on Saturday evening when she saw a group of students running outside. Suddenly, her friend barged in, visibly panicked, saying that she had heard that a student had taken her life after her video was uploaded online.

When they ran downstairs to check, Shikha says she saw “chaos like never before” – some girls were screaming, while the crowd kept getting bigger.

Shikha says another friend then told her that “a fresher” at a neighbouring hostel had filmed some students while they were bathing, triggering the protests.

The university said in a statement: “[There have] been no videos found of any students which are objectionable except a personal video shot by a girl which was shared by herself to her boyfriend.”

But Shikha and the other four students told the BBC that they still think the university and the police were trying to “cover up” the crime.

They alleged that the accused had filmed other students – but none of them have seen these videos or personally know anyone who seems to have been filmed.

Ms Bhatti told the BBC that the arrested woman has denied filming anyone else, and reiterated that they haven’t found evidence of any other videos yet. The BBC has also emailed questions to the university’s administration but hasn’t received a response yet.

While the protests were going on, rumours began spreading online.

Several tweets claimed that some students had tried to take their lives, believing their privacy had been compromised – some also shared a video of an unidentified girl being lifted into an ambulance to back this point.

But both the university and the police have denied this, with the latter saying one girl had collapsed due to an “anxiety attack”.

On Twitter, some users requested others not to forward the alleged videos of the girls if they received it – however, no one has confirmed yet that they have seen these clips. They haven’t surfaced on social media so far either.

Many users have also shared videos of the woman alleged to have shot the videos – some show the hostel’s warden scolding her, while in others, she is being confronted by other hostel residents.

Mr Duggal pointed to how difficult it is to contain rumours online.

“Right now, India is seeing a new phenomenon where more and more people have jumped on the digital bandwagon,” he says, adding that people have shared personal data online “without understanding the privacy ramifications”.

Why are students disappointed?

Toibah Kirmani, a journalism student at the university, said that while it is unfortunate that a lot of unverified information has been doing the rounds on the internet, she is upset with how the university handled the situation.

“Instead of trying to assure us of our safety, the administration has been busy trying to salvage its image by denying anything happened. There might have not been suicides but the students are visibly distressed,” she says.

Shikha says that on Sunday, she saw some”girls banging their heads on glass doors” because they suspected they had been filmed secretly.

The charges against the accused include “knowingly capturing, publishing or transmitting the image of a private area of any person without consent” under India’s Information Technology Act.

“If the accused did not make or share any videos of others, then why has the police invoked these charges against her?” Ms Kirmani asks.

Mr Duggal told the BBC that the above charges aren’t applicable if the accused student had only filmed herself, although she could still be booked for obscenity under a different law.

Ms Bhatti said that the initial charges have been filed based on the police complaint.

“We will amend the charges based on what is found during investigation,” she added.

One of the students said on condition of anonymity that there are many unanswered questions about whether the woman actually did what she has been accused of.

“But the spread of rumours and unverified claims has made it impossible to say anything for sure,” she adds.

In the meantime, the students say that they don’t feel safe any more at the university.

“That’s both physically and digitally,” says one of them.

DISCLAIMER: The Views, Comments, Opinions, Contributions and Statements made by Readers and Contributors on this platform do not necessarily represent the views or policy of Multimedia Group Limited.
Tags:
Bathroom video
Chandigarh University
India