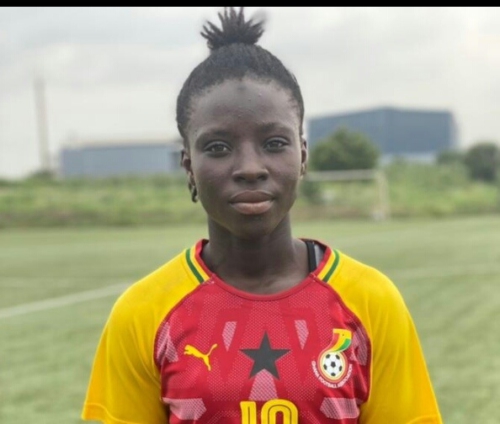 Having appeared in all previous five of the FIFA U-20 Women’s World Cup, Ghana’s Black Princesses were keen to book a ticket to this year’s edition as well.

One player, who was key in making this happen, was 17-year-old Abdulai Salamatu.

Also known as Nteh, the Northern Ladies forward found the back of the net six times during Ghana’s route to securing qualification to the global showpiece.

Apparently, her involvement with the national team was just a plus to her hardworking football career which has seen her come into the limelight.

Born in Tamale, the teenager has featured for Bagabaga Ladies in Ghana’s Women’s Division One before a loan move to Premier League side, Northern Ladies.

In 2018, when she received her first national U-17 call-up, she played in the U17 World Cup qualifiers double-header against Liberia.

Fast forward to 2021, she was promoted to the Black Maidens team.

En route to Ben Fokuo’s side booking a place in Costa Rica, Salamatu faced Ethiopia, Zambia and Uganda. In six games, Salamatu scored six goals with all coming in the last three games.

Not only was she Ghana’s top-scorer in the qualifiers, but the 17-year-old also finished as the top goalscorer of the U20 Women’s World Cup qualifiers in Africa.

What next for Salamatu?

In 2018, former U-17 skipper, Mukarama Abdulai put Ghana on the world map after netting seven goals to emerge the top scorer of the 2018 U-17 World Cup. She also ended the competition with the Bronze Ball as the Black Maidens exited in the quarter-final stage.

This may not be the U-17 but Salamatu can only dream of doing the same exploit with the Black Princesses even if they are placed in a tough group.

Ghana will come up against the USA, Japan and the Netherlands, all three, considered among the best in the World at this level.

What could be special will be the fact that the Northern Ladies forward could possibly help Ghana advance past the group stage for the first time in their history.

In the previous five, they have failed to go past the group stage but Fokuo and his charges are confident of breaking that jinx this year.

Just like the Black Stars, the Princesses have also made foreign-based additions to the team – Sharon Sampson and Malika Ama Mamadou are all in camp as they pursue an endless dream.

For Salamatu, the World Cup is an even bigger stage to do more exploits and for someone who has the desire to continue developing, she can only dream of making these targets a reality.

The World Cup in Costa Rica is expected to commence on August 10.

DISCLAIMER: The Views, Comments, Opinions, Contributions and Statements made by Readers and Contributors on this platform do not necessarily represent the views or policy of Multimedia Group Limited.
Tags:
Abdulai Salamatu
Black Princesses
Costa Rica