About 230,000 people in the country are blind - Ghana Health Service - MyJoyOnline.com

About 230,000 people in the country are blind – Ghana Health Service 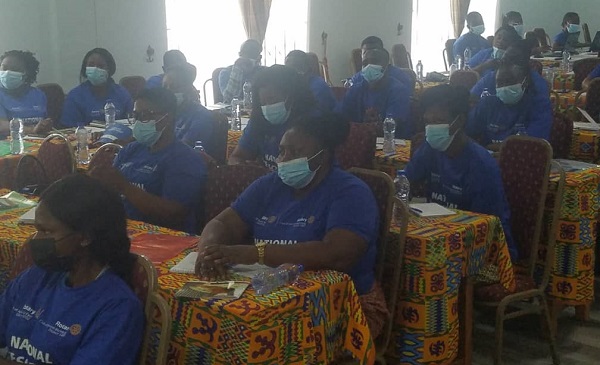 Some nurses and midwives who partook in the training in Kumasi on Saturday [Source: Graphic Online]

The Ghana Health Service (GHS) has revealed that nearly 230,000 people of all ages are blind in the country.

Speaking at a Rotary outreach programme in Kumasi, Saturday, the Head of Eye Care for GHS said many of the cases can be traced from infancy, adding that the prevalence rate of the condition in Ghana is 0.74%.

Dr James Addy explained that the condition, which is known in medical terms as Retinoblastoma, is a malignant tumour of the retina that develops during childhood.

It can also be caused by abnormalities in chromosomes – thread-like structures in human cells that contain people’s DNA.

The condition is severer in children. Lack of funds to access healthcare to detect the disease early for treatment is said to be a leading contributing factor for its prevalence.

Dr Addy noted that the Rotary Club of La East has partnered with the Service, the Korle-Bu Teaching Hospital and the University of Ghana Medical School (UGMS) to train nurses and midwives on how they can improve the survival rate of children living with the condition.

“The support formed part of Rotary’s contribution to improving eye care in the country,” he stated.

He entreated the government and relevant stakeholders to collaborate in helping nip the disease in the bud.

An eye specialist at the Korle-Bu Teaching Hospital, Prof Vera Adobea Assumang, disclosed that more than half of children who contracted the disease died every year over lack of support.

“About 60 children contract Retinoblastoma every year and most of them are reported late, which makes it difficult to save their sight,” she added.