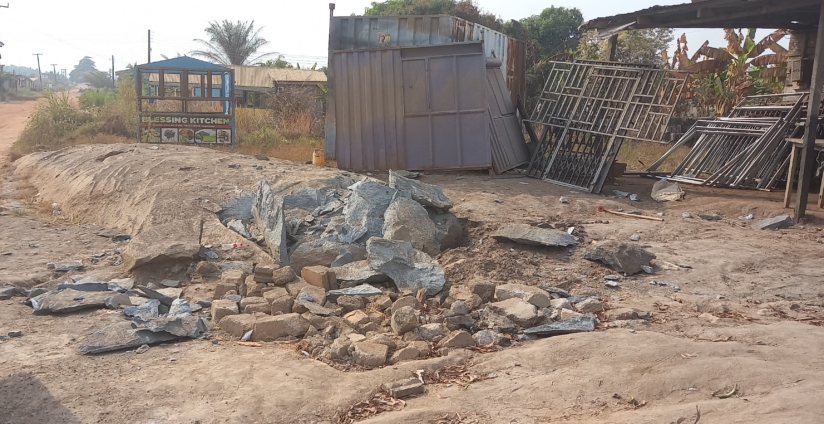 Residents of Abuakwa DKC in the Atwima Nwabiagya District of the Ashanti Region were shocked midnight Monday as tremors rocked the town from an explosion that shook buildings in the area.

The explosion, which was later found to be an uncontrolled dynamite blasting of rock, affected electricity poles in the area, plunging the community into darkness.

The Chiefs and people say the explosion allegedly ordered by the Queen mother of the town to create a pathway to his house has gotten them living in fear.

Residents of Abuakwa DKC were rudely awoken at midnight on Monday by a loud tremor.

Some who spoke to Luv News say the unannounced use of the dynamite sent shivers down their spine.

“All of a sudden, my room became dark. I went out, and the sky was black. After this incident, I could not sleep again,” a woman said.

Another lamented, “My appliances went off as soon as we heard the loud noise. I am a trader. My deep freezer, which is full of meat, is getting spoilt,”

“We have information that it is the queen mother of Kenyase No.2 who ordered for the rocks to be blasted. She wanted to create a straight route to her house,’ he said.

Chief of Abuakwa DKC, Nana Acheampong Ababio, accuses the queen mother of the town of ordering the blast.

He expressed surprise at the action after what he describes as several warnings to her to stop.

“We were all terrified. Residents could not sleep the whole night. Some were forced out of their homes,”

“I knew the queen mother wanted to get rid of this rock. So I warned her to hold on so we can have broader stakeholder consultation. But she carried on with the act,” he said.

The Abuakwa District Police say they are investigating the incident.

DISCLAIMER: The Views, Comments, Opinions, Contributions and Statements made by Readers and Contributors on this platform do not necessarily represent the views or policy of Multimedia Group Limited.
Tags:
Abuakwa
Explosion