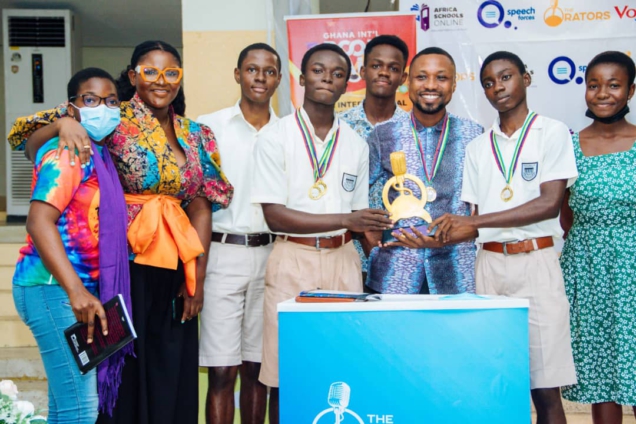 Frederick Arko and Konadu Kwasi Etsiakoh representing Achimota School, are the winners of the 2nd edition of the Orators Inter-School Public Speaking Championship.

The scintillating contest was held at the National Theatre over the weekend. Loise Mensah, a form 2 student of Chemu Senior High School, was also adjudged the overall best orator at the event.

The Orators Championship is an inter-high school programme designed to foster the cognitive, critical thinking and expression of students.

The programme is organised as a joint partnership between Africa Schools Online and Speech Forces. This year’s edition was supported by Africa Leadership Academy, Voltic Ghana and Niche Cocoa.

The event, which was part of the activities to mark the 19th Ghana International Book Fair, was also supported by Hollandia.

24 students representing 12 schools from 5 regions battled it out with thought-provoking and creative speeches in 3 exciting speaking rounds.

Frederick Arko from Achimota School won the best speech for the prepared round which had the competitors speaking on a chosen topic from a list sent to the schools ahead of the championship.

The best speech award for the Impromptu round which had the competitors speaking on a topic on the spot went to Loise Mensah of Chemu Senior High School.

Achimota School was crowned overall winners for their impressive performance at Persuasive round. Legacy Girls’ College came in close 2nd followed by Presbyterian Boys’ and Chemu.

The award-winning schools and students received cash prizes, trophies, medals and goodies from the sponsors. Some outstanding orators have also been selected to represent Ghana in Model AU Conference, The World Scholars Cup and World Individual Public Speaking Championship later in the year.

Mr. Abel Ohene Acquaye, speaking on behalf of the organizers, expressed gratitude for preparing their students adequately for the challenge.

He thanked sponsors and the various partners that made this edition successful. He also made a passionate call to Corporate Ghana and other organizations to support the Academic Talent Development Program which provide platforms that nurture the next generation of thinkers and doers.

Mr. Abel hinted that plans are already in motion for the 3rd edition next year.