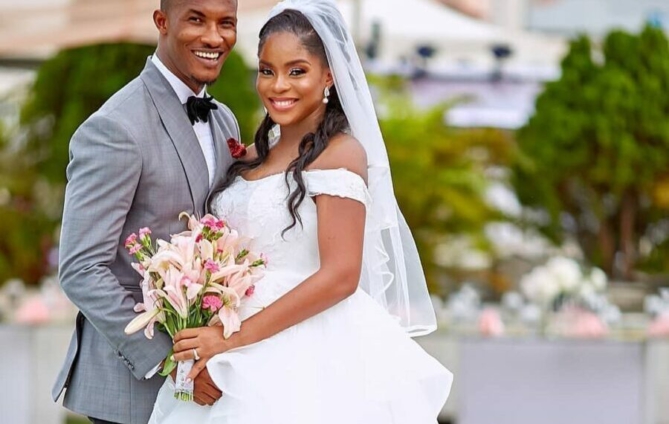 Nollywood actor Gideon Okeke has confirmed that his marriage of less than four years to Chidera Uduezue has ended.

The couple had a beautiful white wedding ceremony on April 21, 2019, after their traditional wedding in December 2018 in Abagana, Anambra State. They have two sons.

The actor found fame after he contested in the first edition of Big Brother Nigeria in 2006 and for his role in the acclaimed Nigerian drama series, Tinsel. His wife, on the other hand, is a talent scout and founder of Catch 22 Model agency.

The controversial actor broke the news on his Instagram amidst separation rumours that trailed them for over a year.

Breaking the news, he wrote “You wouldn’t believe it if I told you that I’m separated from My marriage, right? No, you wouldn’t…so grab a seat. It is in the interest of clarity and a clear conscience that this becomes imperative. But yea… Breakfast reach me too. Las Las.(sic)”

“It’s been a hard hot pill I’ve had to swallow, boy. It sure humbles one. This PSA wouldn’t be so important (to Me), but for the trap that I find FAME to be sometimes gagged,” Gideon Okeke noted.

He urged his fans to keep him and his ex-wife in their prayers.

“But as you look to the future, pray for my boys. They are such lovely boys. Please, put us all In your prayers…no pity party. They need mum and dad to be sane, sound and robust for fulfilling their best interests, and we are working towards it. Hard!

The 39-year-old actor also sought closure and asked friends and family to respect his privacy.

“I thank GOD. And I Thank You for rooting for Us—one Life…many stories. Please don’t call, don’t text, as we work our way to final dissolution. These processes take a toll on one, as you may know. God bless you all.” He wrote.

In August, rumours of the couple’s plan to dissolve their four-year marriage due to irreconcilable disagreements were rife.

For some time now, there have been rumours that the pair are no more together.

Several stories claim that Okeke and Chidera haven’t had a very close connection.

However, they attended their son’s school birthday party in July together. It was their first public outing in months.

DISCLAIMER: The Views, Comments, Opinions, Contributions and Statements made by Readers and Contributors on this platform do not necessarily represent the views or policy of Multimedia Group Limited.
Tags:
Chidera Uduezue
Divorce
Gideon Okeke
Gideon Okeke divorce
Marriage