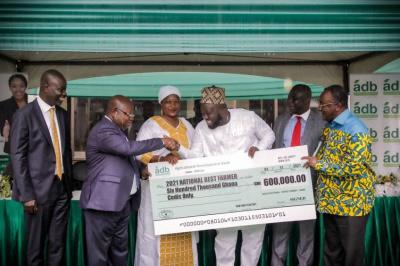 This excludes the huge volumes of non-funded facilities such as letters of credits and guarantees granted for the purchase of agricultural inputs, machinery, equipment and raw materials.

The over 119% increase has come on the back of strategy to refocus the bank onto its original mandate to provide financial intermediation to the agricultural sector with the aim of using the agriculture sector as a means of wealth and job creation for the ordinary Ghanaian.

The bank has been an active partner for the   implementation of the novel One District One Factory (1D1F) and so far about 20 companies have received financial support of over ¢100. Examples being the Ekumfi Fruits & Juices Limited, Kumasi Jute Factory, Weedi Africa Tomatoe Processing Factory and Kaad Integrated Limited.

The bank has over the years imported outboard motors for sale to fishers at cost either under lease financing or through direct sales. It is supporting the Fisheries sector imported 1,300 outboard motors made up of 1200 (40HP) and 100 (15HP) Yamaha products at a cost of ¢19.8million for the Ministry for Fisheries and Aquaculture Development and the Coastal Development Authority.

The bank absorbed all incidental and related costs amounting to about ¢7.0 million which will have been a cost to fishers.

To further contribute to government’s effort at reducing the importation of poultry into the country, the bank this year announced the implementation of the Broiler Revitalization Programme with poultry farmers in the Bono region being the first beneficiaries.

A total of over 15 houses has since been constructed in different regions across the country for 15 National Best Farmer Award Winners.

In 2017, following strong advocacy and presentations by the Ministry of Food and Agriculture, Past National Best Farmers, a decision was taken to change the first price to a cash prize.

This is to enable the award winners invest the fund to expand their businesses and provide additional employment.

So far, the Best Farmers have prudently utilised their prize monies to expand their businesses.

As the lead sponsor of the award, the bank also organises a welcome cocktail for all Awardees and also a National Farmers Forum.

“We believe in agribusiness for wealth creation and the Agricultural Development Bank Plc will remain committed to the Agribusiness sector of the economy, outgoing Managing Director, Dr. John Kofi Mensah mentioned.

Ayekoo to our gallant Farmers and Fishers.

DISCLAIMER: The Views, Comments, Opinions, Contributions and Statements made by Readers and Contributors on this platform do not necessarily represent the views or policy of Multimedia Group Limited.
Tags:
ADB
National Best Farmer Award Winners
One district one factory