Adidas’ Ultraboost 21 is still the king of stylish running shoes 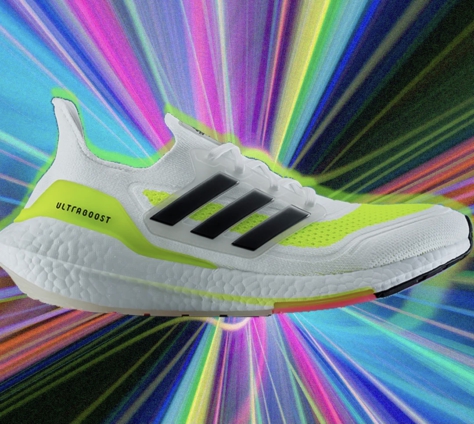 Looking good while working out might not be your number-one priority, but we’d like to think it still ranks pretty damn highly.

So the all-new Adidas Ultraboost 21 is a big deal for anyone who’d rather their sole sojourn outdoors these days isn’t a visual tribute to the stylings of Dave Benson Phillips.

For the uninitiated, the Ultraboost has been the running shoe of choice for serious runners with swagger for half a decade now.

Kenya’s Dennis Kimetto broke the world marathon record at the 2014 Berlin Marathon in a pair of the original AdiZero Adios Boost, while Kanye made the Triple White Ultra Boosts a bona fide menswear essential after donning them in 2015 at the onset of Yeezy-mania.

They’re a crossover smash hit in the same vein as Among Us, The Ordinary and short-selling giant hedge funds, mainly thanks to that iconic cushioned sole and a heel that’s as thick as your average QAnon devotee.

What’s new with the Adidas Ultraboost 21? Well, the sixth entry in the series is a story of iterative but substantial refinements, starting with a six per cent increase in Boost tech – the midsole eTPU foam that absorbs your stride before bouncing back into shape – over last year’s Ultraboost 20.

In essence, this is the stuff that made this shoe so revolutionary nary a decade ago. If you’ve not worn a shoe like it before, the sensation is somewhat akin to running on a trampoline.

It takes a bit of getting used to, but you just feel a whole lot more momentum to your average 5K.

A bit of extra Boost isn’t the only upgrade here either. You also get a redesigned LEP (Linear Energy Push) for a 15 per cent increase in “forefoot bending stiffness” for a more controlled and responsive stride, while the shoe’s Primeblue “upper” is made from at least 50 per cent Parley Ocean Plastic.

Granted, the Ultraboost 21 isn’t going to rival Veja’s Condor 2 for eco-friendly credentials, but it’s a welcome touch at least – especially for a pair of premium £160 trainers.

Aside from a rock-solid pair of all-weather running shoes, what you’re really paying for is that retro-futurist aesthetic, which is even more pronounced this time around.

The “Solar Yellow” pair pictured above gives off a strong Denis Villeneuve vibe, although there’s also all-white and navy editions for those who’d rather something more understated for casual wear.

The real joy of the Ultraboost 21s is slipping them on. With a sock-like design they’re a lot more fitted than a typical running shoe and so lacing up with a pair feels super luxe.

Just be sure to check your measurements and ideally try on these shoes before making the investment: your normal sizings may not apply here.

Although the tech behind the Ultraboosts has recently been superseded by the carbon-plated Nike Zoom AlphaFly Next% and Adidas’ own Adizero Adios Pro among long-distance and marathon runners, they remain a dependable companion for in and around the 10K mark.

You can put a good deal of distance into them without worrying about comfort or the conditions around you.

Unless you’re particularly minded to keep a white pair squeaky clean, then you’ve effectively signed up for an endless existential crisis.

Despite a heavier-than-average weight of 353 grams, we didn’t have any issues schlepping around our usual route with the Ultraboost 21 in tow.

If you’re the type to chase PBs then they’ve got your back and they’re just as trusty if all you’re looking for is a bit of fresh air and a healthy sweat.