Adina sweeps fans off their feet at ‘Amplified’ concert 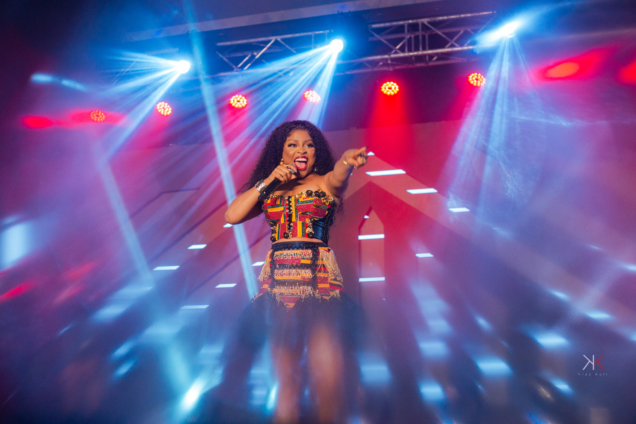 Singer Adina over the weekend held her first solo concert since joining the Lynx Entertainment family.

The concert dubbed ‘Amplified’ was held at the Movenpick Ambassador Hotel in Accra on Saturday, July 23.

The concert saw fans and celebrities including Reggie Rockstone, his wife Zilla Limann, Sarkodie, Kuami Eugene and many others show up in their best gear.

Adina was welcomed to the stage by actor Chris Attoh who took pride in the singer’s ability to entertain fans since her days in Stars of The Future. Adina’s entry to the stage was preceded by a traditional dance.

It wasn’t long before fans were on their feet welcoming Adina to the stage eager to get the event to begin. She took fans on a journey from her old songs to the new hits featured on her album Araba.

The singer’s ability to serenade while dancing and carrying her fans along kept the audience on their toes all night.

Adina later took her audience on an emotional journey as she told them about how much she misses her father who she did not grow to meet because of a war that broke out in his home country.

She sang Daddy’s Little Girl, a song off her album dedicated to her dad. The song also won the VGMA Record of the Year award at the 2021 ceremony.

The singer who teared up after her performance got fans in their feelings. The performance also earned the artiste a standing ovation.

Adina was later joined by some surprise acts. Trigmatic stepped up to perform Coastal Vibes with the singer.

The audience was beside themselves with excitement when Sarkodie mounted the stage to perform ‘Makoma’ with Adina.

The singer surprised her fans when she rapped alongside Sarkodie.

Stonebwoy who also stepped up to perform like Sarkodie had fans screaming out lyrics on top of their lungs during their set.

Adina’s label mates KiDi and Kuami Eugene later joined her to perform ‘One Man’ and ‘Killing Me Softly’ respectively.

Adina later took to social media to thank her family and fans for making her concert a memorable one. Additionally, she thanked the artistes who showed up and her team for their hard work.