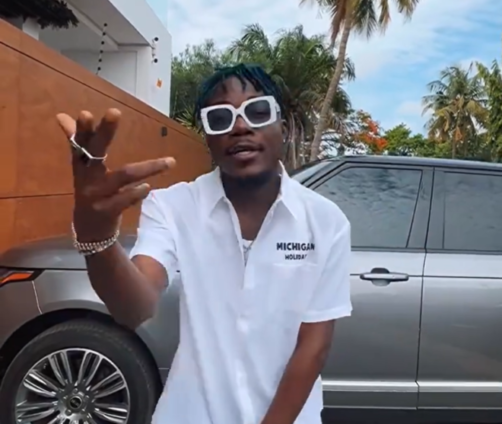 Ghanaian singer Camidoh is definitely having an awesome year especially since his hit song, Sugarcane, has been crossing borders globally.

Since the song got released and started topping the airwaves, Camidoh has found a way to re-live it in the trends. The remix featuring King Promise, Nigeria’s Mayorkun and Darkoo has pushed the mileage of the song further.

Currently, his acoustic edition is steadily garnering the momentum to keep the song above others in many DJs’ playlists.

This week, Shatta Wale’s spiritual tune, ‘On God’, is at number 2. The song motivates people to look up to God in their daily happenings.

It remained number one for days when it got released on YouTube, even at the time Black Sherif was all over with his Kwaku The Traveller song.

Black Sherif came through at number 3 this week on the Adom Music Chart list. Kwaku The Traveller, per stats, is set to trend for a longer time in Ghana’s music space.

One of the musicians who are seriously championing the Afrobeats agenda is Kelvyn Boy. He is equally having a great year following the release of Down Flat.

The song he wrote in less than 10 mins has found its way to even the Billboard Charts. It was number 4 this week on Adom FM’s Chart show.

Stonebwoy released Therapy as his first single under the Def Jam record label, one of the highly reputed music labels in the world. The RnB, Reggae, Highlife and even the Dancehall genre could be felt in the ‘therapeutic’ single. Stonebwoy stays at number 5 this week.

Gospel musician Perez Musik is at number 7 this week on the Adom FM music chart with his Hewale Lala song.

Championing Highlife, Kuami Eugene clocks number 8 this week with his Take Away song. With only the visualizer released on YouTube, Kuami is garnering close to a million views.

Adina is currently at number 9 with ‘Hallelujah’.

Kofi Kinaata has his Have Mercy song at number 10 this week.

Fameye comes through at number 12 with his Everything Now song featuring Kwesi Arthur. The song is off his latest music project dubbed Songs of Peter.

King Promise got the number 13 slot this week on Adom FM music chart with his Ginger song.

Rapper Smallgod attained the number 14 slot with his Falling song, which features KiDi and Darkoo.

The Tema-based rapper Kwesi Arthur came through at number 15 with his Disturb song, off his Song of Jacob album.

Gospel musician Joyce Blessing got the 16th slot on the chart with Trending.

The Slayer in Christ, Evangelist Diana Asamoah, was number 17 on the Chart with her Mesom Ewurade.

Rapper Eno Barony continues to wow fans with her rapping prowess. Her latest, The Finish Line, featuring Amerado got fans weighing in on “who ‘murdered’ who”. It is at number 18 this week.

Kwabena Kwabena’s Fingers had the number 19 slot this week.

Criss Waddle’s Take Me Back featuring Stonebwoy made a debut at number 20 in week 22.