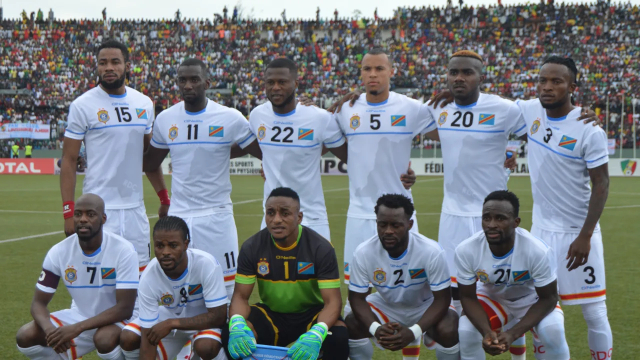 DR Congo will be making their 19th appearance in the AFCON in Egypt. As Congo, they made their debut in 1965 in Tunisia and packed their bags home after the first round. The Leopards prepared well for the next one in 1968 and ended up winning the trophy. Their next success came in 1974 after beating Zambia by two unanswered goals in a replay. The first tie finished 2-2.

They won the bronze medal in 1998 after defeating Burkina Faso 4-1 on penalties in a famously exciting game that ended 4-4 after extra time. The Leopards earned another bronze medal four years ago, beating Equatorial Guinea 4-2 on penalties after the match ended goalless.

DR Congo managed to reach the quarter-finals in the last edition and lost 2-1 to four time champions Ghana. The Leopards are aiming to make it a third trophy win this July.

The darkest period for DR Congo came after winning the 1974 African Cup of Nations and participating in the 1974 World Cup.

The Leopards were eliminated in the first round of the 1976 African Cup of Nations after recording a draw and two losses in the group stage and from 1978 to 1986, the country either withdrew or did not qualify for the African Cup of Nations. They also failed to participate in qualification for the 1978 World Cup and 1986 World Cup.

DR Congo is known to be one of the top teams in Africa, placing 5th among the African teams and 49th overall in the FIFA rankings.

Florent Ibenge will be tasked with the job to write DR Congo’s name in the history books for the third time. Florent has had a wealth of experience working with the national team and has led the Leopards to two previous AFCON tournaments from the touchline (2015, 2017). Florent once managed Shanghai Shenhua from April to May 2012. His was then appointed the coach of Vita Club in February 2014.

The DR Congo national team gave him the opportunity to manage them in August 2014 and he accepted. Ibenge has worked with both club and country as head coach from 2014 to this day, a big ask for the tactician and one he has handled well so far.

Apart from Issame Mpeko and Bokadi Bope, Ibenge has an inexperienced set of defenders to rely on in the tournament and has to find a way to get a perfect blend to stifle attacks from the opposition. Ibenge will be without the services of Dieumerci Mbokani who is currently injured. A huge loss for DR Congo.

Florent’s men battled hard to make it out of Group G in second place, earning nine points from a possible 18, and two points behind leaders Zimbabwe. DR Congo started qualification with a fairly comfortable 3-1 victory over neighbours and rivals Congo. They picked up another win in the last round of matches. That was a 1-0 win over Liberia.

The Leopards suffered a 2-1 defeat to eventual group winners, Zimbabwe. The rest of their fixtures ended in stalemates. DRC scored eight and conceded six.

Who’s in their group?

DR Congo will face Egypt, Uganda and Zimbabwe in the AFCON tournament.

How have they fared against those teams in the past?

DR Congo are yet to get the better of Egypt in 7 matches (2D 5D). They have a bad record against Zimbabwe as well, winning once in 4 encounters (1W 1D 2D). DR Congo has the slight head to head advantage over Uganda, winning 4 and losing 3 in seven games.

Ibenge will look to Yannick Bolasie to make the difference for his side. The former Crystal Palace winger has a bag of tricks which helps him easily get past his man. He played for Anderlecht on loan last season and found the net 6 times in 17 appearances. Bolasie unfortunately missed out on the previous edition due to injury but is now back to add to his 9 goal tally for the Leopards.

Cedric Bakambu is a player to watch at the tournament. The former Villarreal man has an eye for goal and gets himself in dangerous positions to find the net. Cedric was in red hot form last season, scoring 30 goals in 36 appearances for Beijing Guoan.

The 28-year-old striker finished as the Leopards highest scorer during qualifying, with three goals. At the moment, he’s Africa’s most expensive transfer, ever, after moving from Spain for £65 million to the Far East.

The Leopards will have a tough task getting past Egypt and Zimbabwe especially. Ibenge can steer his side to the next round with the talent available however and possibly book another quarter-final berth.