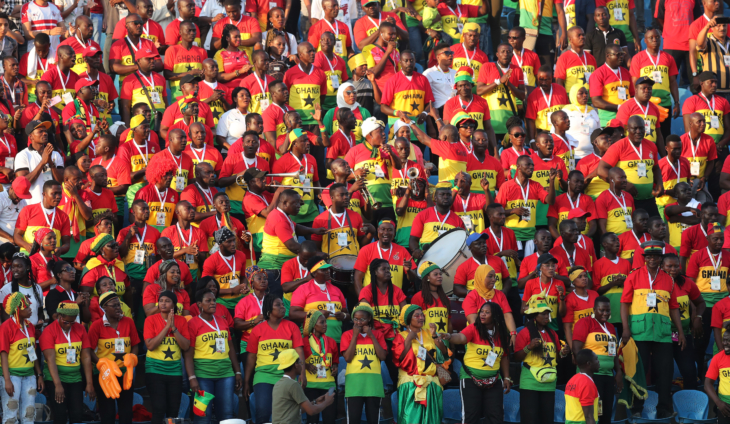 Ghana Fans during the 2019 Africa Cup of Nations Finals football match between Guinea Bissau and Ghana at the Suez Stadium, Suez, Egypt on 02 July 2019 ©Gavin Barker/BackpagePix

The Ghana Embassy in Egypt is demanding over $330,000 from the Ministry of Youth and Sports for pre-financing the accommodation of supporters flown to the North African country for the 2019 Africa Cup of Nations (AFCON), JoySports has learnt.

The Sports Ministry in 2019, revealed that $1,43 5,190 was spent on accommodation during Ghana’s participation in the tournament.

It is unclear how much of that money was spent to accommodate the over 500 supporters flown to support the Black Stars.

However, the Embassy is demanding $332,000 from the Ministry for funding the stay of some supporters.

JoySports understands that the current Sports Ministry, led by Mustapha Ussif, is unaware of the debt as there was no breakdown of expenditure of the team in the handing over notes presented by former minister Isaac Asiamah.

The Ministry, therefore, will audit the accounts before concluding on whether to pay the supposed debt.

Sources tell JoySports that the ministry has a debt of GHS 20 million, of which about GHS 5 million was accrued from the last AFCON in Egypt.

The notable chunk, however, is the $332,000 demanded by the embassy. Other debts from the AFCON 2019 have to do with some travel and tour agencies who have all demanded various sums of monies from the Ministry.

The Confederation of African Football (CAF) gave the Ghana FA about $600,000 for the Black Stars’ preparation and participation in the tournament, but the Sports Ministry, in September 2019 wrote to the association – which was then under Normalisation – to demand 50% of the money.

The football governing under the leadership of Dr Kofi Amoah transferred $300,000 to the Ministry as requested.

The Ministry directed the GFA to use the rest of the money to pay clubs that participated in the NC Special competitions.