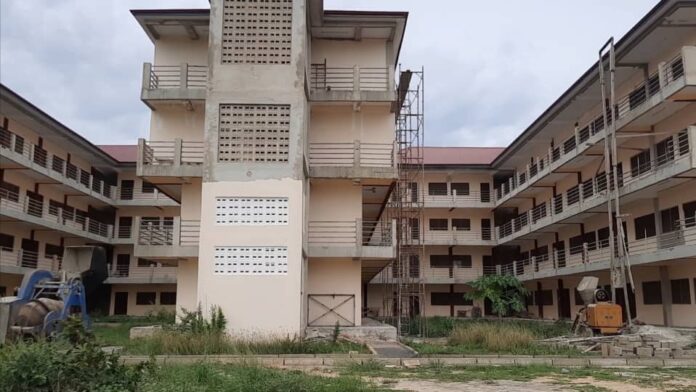 The Ministry of Education has said that work is on course to fully complete the E-block community Senior High School in Agblekpui, Aflao in the Ketu-South District of the Volta Region.

“Currently, the project is about 96% complete. The outstanding works include final painting and clearing of the site,” part of a statement released by the Ministry on Monday, October 25 read.

“The Ministry pledges to complete the outstanding works and operationalize this E-block community day Senior High School as well as others across the country,” the statement added.

The Education Ministry, also indicated that progressive payments have been made to the contractor assigned to the project to ensure that works are completed.

This particular E-block project made news headlines after the paramount chief of the area, Torgbui Adzonugaga Amenya Fiti V, gave the government a four-month ultimatum to operationalize the facility.

He was unhappy that several young people in the area were denied access to education as the project was left unattended.

“Look at the structure standing over there, it’s 90% complete. In the era of the NPP, we have free Senior High School education and my people are not benefiting because the school is not ready. By next year February, new entrants will go to school. Carry this message to the Minister of Education that come February, I want this school to be opened,” he told the Minority side of the Education Committee who were touring uncompleted school buildings in the Ketu South constituency.

Reacting to this, President Akufo-Addo, amidst laughter, quizzed, “is he the one going to give the Minister of Education ultimatum?”

After the statement, President Akufo-Addo assured the traditional leader that his government is resolved to continue projects started during the tenure of John Mahama. Akufo-Addo stressed that plans are being executed to complete the projects and put them to good use.