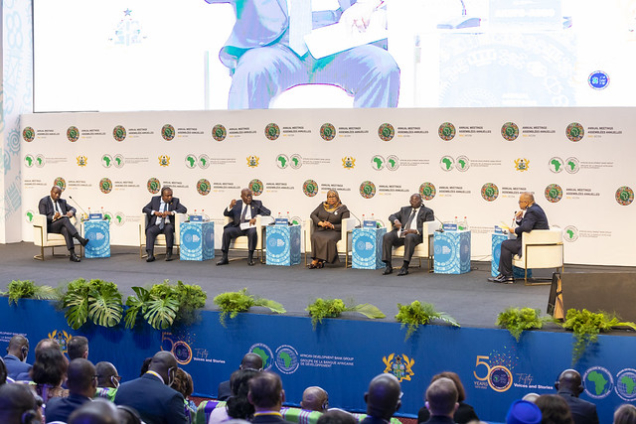 At a virtual meeting convened by the African Union Commission on Thursday, government ministers and development partners commended the initiative, which will boost domestic production of essential grains. Imports of these staples have been hit by the ongoing Russia-Ukraine war.

During the meeting African ministers of finance and agriculture and representatives of non-African member countries, including the governments of Ireland, the UK, Canada and Germany, reviewed the African Development Bank’s facility and discussed their countries’ needs.

“I commend the African Development Bank’s initiative,” said President Macky Sall of Senegal, current chair of the African Union. “There is no reason to do business as usual in this period of exceptional crisis.”

Sudan’s finance minister, Gibril Ibrahim, said his country was facing the twin challenges of supporting a large population of refugees and managing a financial crisis. “We need strong support to feed both Sudanese and refugees,” he said. He expressed optimism that Sudan could potentially be a breadbasket for Africa. “We think we can fill the gap if we can invest more money in food production,” he said.

Ken Ofori-Atta, Ghana’s finance minister, said: “We must move fast to save our people from this hunger and increased cost of living.” He said the continent, weakened by Covid-19, now faces the worst inflation and food crisis in two decades. He also urged African finance ministers to adopt a new mindset to meet the current crisis.

Liberia, a country that relies heavily on food imports, is responding to supply chain disruptions by promoting local food production and adopting innovation, its agriculture minister, Jeanine Cooper, said. As an example, she said nearly 80% of Liberians have mobile phones. “Digital payment solutions have become the new normal for rural financing,” she said.

Kristalina Georgieva, Managing Director of the International Monetary Fund, urged African countries not to close down trade. “The message the world needs to hear is, keep trade open.” Georgieva also called for deeper investment: “Africans can help Africans by urgently investing in more food production in the continent. We are looking for ways to invest with you in resilience to shocks, especially climate shocks.”

Dr. Akinwumi Adesina, President of the African Development Bank Group, said the institution stood ready to meet the looming crisis. He stressed that securing the continent’s emergency food requirements should be built on higher productivity rather than aid dependency.

Dr. Adesina said the success of the initiative would hinge on solving fertilizer shortages. One way to do this is by providing subsidies to farmers, including the possibility of the private sector delivering them. The emergency facility will also extend trade credit guarantees and other mechanisms to fertilizer importers and intermediaries, he said.

“We look forward to working closely with the German and French plans and the broader plans of the G7 on food security for Africa. With bilateral financing support to close the $200 million financing gap, we can ensure the Africa emergency food production facility’s success,” Dr. Adesina said.