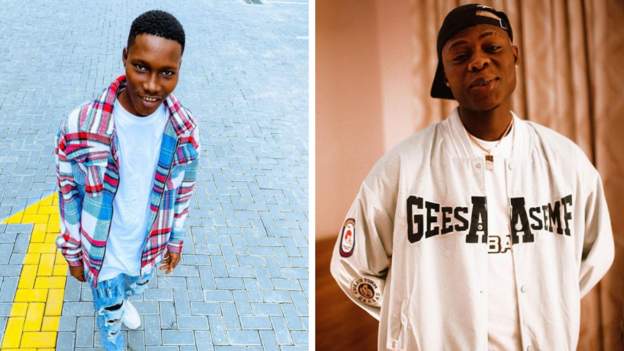 Two Nigerian musicians have been arrested after a raid on their homes on Thursday, by the National Drug Law Enforcement Agency (NDLEA).

Zinoleesky and Mohbad, two of the country’s afrobeats rising stars are accused of possessing “cannabis and molly” [MDMA], the force said.

Its spokesman Femi Babafemi told the BBC that both men have not been charged and that the agency will determine if they are to be charged to court or rehabilitated after investigations.

At least three other women, believed to be associates of the musicians, were also arrested in the raid, the NDLEA said.

Zinoleesky – real name Oniyide Azeez, and Mobad – whose name is Ilerioluwa Oladimeji, have not commented publicly but a video recording during their arrest has surfaced online.

The recording shows one of the musicians, believed to be Zinoleesky, protesting against the handcuffs used on him by NDLEA officials. A scuffle seemed to ensued before both men were taken away.

Fans online have complained, saying the NDLEA’s treatment of the pair is heavy-handed.

Last month, a comedian charged by the NDLEA after a similar drug-related arrest was convicted but not sentenced by the judge who deemed the volume of substance found on him as insignificant.

DISCLAIMER: The Views, Comments, Opinions, Contributions and Statements made by Readers and Contributors on this platform do not necessarily represent the views or policy of Multimedia Group Limited.
Tags:
Afrobeats stars
Arrested
Drug Abuse
Nigerian musicians