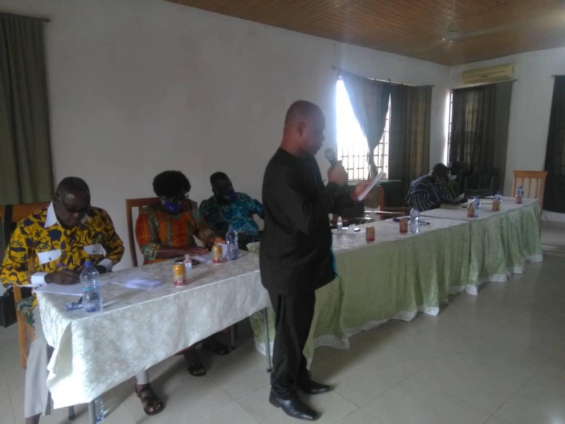 The Agona District Workers’ Cooperative Credit Union (ADWCCU) has completed consultations with financial experts on a merger with the Church of Christ and Maranatha Credit Unions.

The partnership is to help mobilize sufficient savings to avoid insolvency. Chairman of the Board of Directors of the Credit union, Mr Wisdom Yaw Badjessah,  announced this when he addressed a Special General Meeting (SGM) of the Union at Swedru.

The SGM was to allow shareholders deliberate on the merger with the two other union operators in the Agona West Municipality and to endorse it.

The Chairman said the decision to partner with other Unions had been necessitated by the impact of the Covid-19 pandemic on the economy. By joining forces with the other unions, the partnership will effectively avert the collapse of the Union.

The meeting was under the theme ”Serving Members amid COVID-19 Pandemic”.

Mr Badjessah said the Union, which consisted of committed government workers and other business operators, was facing serious challenges including savings mobilization, hence the need to merge to increase the share capital.

He stated that the Board and management took the bold decision as a result of frequent savings withdrawals that had negatively affected operations of the credit union since the outbreak of the Coronavirus.

The Board Chairman said the Annual General Meeting (AGM) for 2019 was scheduled to have been held in April 2020 but had to be rescheduled due to the pandemic.

He said the SGM was held for selected members to enable participants to share ideas to help the Union make meaningful gains.

The Board Chairman said the concept of Credit Union thrives on four cardinal pillars, namely; mobilization of savings, safe custody of members’ money, supporting and assisting members financially and ownership of Credit Unions.

He said the Credit Unions were there to encourage members to cultivate the habit of savings, regardless of the amount, as a major way of economic self-empowerment to help in times of crisis.

Mr Badjessah, however, did not declare any profit for the three years operations but hinted that the Credit Union had a solid financial base needed to prepare itself for the proposed merger.

“The board and management of the Credit Union are not oblivious of the challenges that confront the financial sector of the country and thus measures and policies have been put in place to stem the tide and weather the storms for loyal members to be offered the best services”.

The Board Chairman said an ultramodern office has been built by the Union to be officially commissioned in December 2020 to enable the workers to move from rental premises into the edifice.

The Central Regional Manager of Credit Union Association (CUA), Mr Prince Darlington, asked members of the Union to support the proposed merger adopted by the board to help sustain it and increase profit.

He said if failure to endorse the decision would adversely affect the Union and could even lead to its collapse.

The Regional Manager of CUA said the merger with two other Credit Unions would increase its competitiveness and mobilize adequate savings to build a sound financial base.

The Boards and management of Church of Christ and Maranatha Credit Unions were present and contributed positively to the merger of the three credit unions to become the third force in the Agona West Municipality and its adjoining districts.

The General Manager of Agona District Workers Co-operative Credit Union, Mr Eric Acquah, said the merger was one of the best options for the financial institutions to improve the sustainability of the gains and also to fast track approval of loans for the members in these difficult times.