Agradaa waxes religious as Police escort her out of court 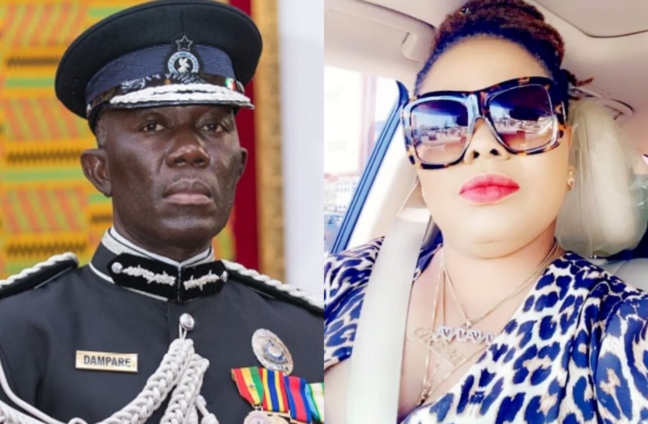 The leader of the Heaven Way Church, Patricia Asiedua, popularly known as ‘Nana Agradaa’, on Thursday expressed great faith in God as she made her way out of court following criminal charges levelled against her by the State.

Exiting the court under police escort, the controversial preacher burst into a Twi chorus to express her trust in God to deliver her from her woes.

“Nkunimdi wↄ hↄ ma wↄn a wↄtwƐn Kristo…”, to wit, there is victory for those who wait upon Jesus Christ, she sang as the Police led her away in front of a teeming crowd.

Some supporters who came to show solidarity with her joined her to sing as she waved a scarf and walked into a waiting Police vehicle.

At the hearing on Thursday morning, her lawyers entered an application for bail but it was declined and ordered that trial would continue on Monday, 17th October, 2022.

‘Nana Agradaa’ was arrested earlier this week, following allegations of a money doubling scam levelled against her by some of her church members.

On Saturday, October 8, social media was awash with videos of aggrieved church members of ‘Nana Agradaa’, accusing their leader of swindling them.

In a spree of comments monitored by JoyNews, the alleged betrayed congregants said they took her for her words and gave out various sums of money with the hopes of receiving multiple folds as she had promised.

Some of the victims of the supposed scam said they travelled from long distances to meet Nana Agradaa to collect their money after her promises failed.

Their complaints subsequently reached the Police, leading to her arrest.

Meanwhile, scores of social media users have criticised the affected church members for being too gullible and vulnerable.

DISCLAIMER: The Views, Comments, Opinions, Contributions and Statements made by Readers and Contributors on this platform do not necessarily represent the views or policy of Multimedia Group Limited.
Tags:
court
Ghana Police Service (GPS)
Nana Agradaa
Ponzi Schemes